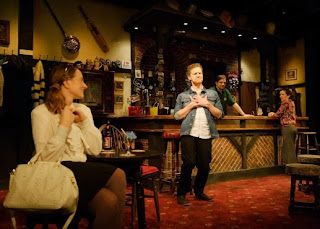 ‘Two’ becomes four in Deafinitely Theatre’s thoughtful take on Jim Cartwright’s bittersweet, pub-based comedy. The original version requires just two actors to play the landlord, landlady and their embattled clientele. Andrew Muir’s production uses four actors, two of whom sign. It is a subtle (slightly flawed) approach, which playfully explores how we connect with each other.
There are some beautiful monologues in here, which have a touch of Alan Bennett about them – only with an extra splash of acid. Whilst one actor narrates, another signs. A fascinating tension develops between the speaker and signer. The sign language and monologue fall out of synch at revealing moments and the signer and speaker’s expressions also clash, teasing out further complexities from Cartwright’s script.
Sophie Stone is heartbreaking as the wife and carer who falls asleep over her pint of Guinness. Stone plays all her broken characters with a glimmer of strength, allowing us to sense what has been lost over the years. Jim Fish impresses as a lonely but content old man who is happily haunted by his dead wife.
The choice to use four actors does have its drawbacks. The dialogue drags on a little and the comedy feels heavy-handed. The central drama between the landlord (Matthew Gurney) and landlady (Paula Garfield) is fractured and muted. When the two finally come to blows it feels strangely remote; a tragedy that is happening to two characters we barely recognise.