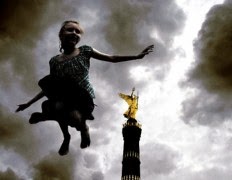 Ciaran McConville has written a tidy play about the final years of Soviet occupation in East Berlin, which might have worked well in a conventional space. Unfortunately, ‘Heaven in Berlin’ has been turned into a promenade production, set amid an industrial space in Battersea. The play and concept clash horribly and the dialogue feels false, while the direction is too flashy.

This could have been fun. There’s a huge shadowy space to play with, a live band performing ’80s music and shedloads of dry ice. Mist stings our eyes and sultry guitar chords wrap around us. But as soon as the scenes begin, the music shuts down, the lights snap on and the atmosphere dries up.

There’s plenty of espionage and intrigue here, but it’s all a bit cosy. Cleaner and ex-painter Ida (Ida Bonnast) is being blackmailed by the Soviets, Brit rocker Brian (Ian Bailey, with the obligatory ‘creative’ eyeliner) is being watched and his new wife Greta (Annabel Capper) is desperate to flee Berlin. There’s sex, suicide and even a lesbian kiss, but scenes are ploddy and the drama too predictable.

Director Jamie Harper strains to sex things up. There’s a lot of fervent praying in hazy churches, frantic dancing and spotlit sorrow. A paper wall is gradually ripped apart. As we traipse about the smoky space it feels like we’re covering a lot of ground – but not really getting anywhere.