Survey: Theatre Audiences are Younger, Experimental and - Shock! - in Jeans 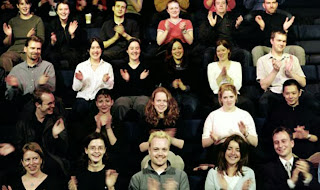 My love for theatre has nearly brought me to blows with a number of friends over the years. OK, let’s rein it in a little. I’m quite small and I’ve never come close to punching anyone in my life. But stern words in mightily clipped tones have been exchanged, particularly when friends have branded theatre an elitist and out-dated art form. I’ve argued passionately and on a few sublime occasions, when the optimum amount of wine has been consumed, persuasively. Now I have the stats to back me up.
A recent survey performed by Ticket Master has been tweeted, liked and possibly laminated and framed by a whole wave of justifiably excited theatre aficionados and practitioners. Admittedly, this survey only takes into account the views of around 1,500 London theatregoers – but the results are surprising, revealing and hugely encouraging.
Next time a friend dismisses theatre as irrelevant or archaic I will lob this fact at them: 16 – 19 year olds are more likely to attend the theatre than any other age group questioned. That a lot of these teenagers will inevitably be students on a school trip does not diminish this statistic.  School theatre trips have proved the initial inspiration for droves of theatre practitioners, myself included. Aged 12, I fell madly in love with an intoxicatingly vicious Lady Macbeth and never looked back.
Crucially, theatre attendance doesn’t freeze up once those teenagers leave school. 20-24 year olds and 25-34 year olds are the second and third most likely age-groups to take a trip to theatre. So much for the blue rinse brigade! I cannot over-emphasize how cheering this statistic is for those just beginning or already deeply involved in theatre. It confirms that theatre is far from dying out. Instead, it is evolving. This is an art form that is re-inventing and re-aligning itself in order to survive.
The emergence of interactive theatre, which proved popular with 39% if those questioned, suggests just how radically London theatre is changing in the quest for relevance. Interactive theatre engages the audience in a direct and often physically demanding way. Shows are performed outdoors; on the streets, in half-lit car parks and empty playgrounds. In other words, they’re nowhere near the West End. The tickets are cheaper, the locations are shabbier and the locals are younger.
I have always believed it is the theatres themselves - and the expectations these grand venues bring – that dictate the London theatregoing etiquette. The West End theatres are posh and, as a result, so too are the audiences. But immersive theatre strips all of that away. You’d look very silly indeed, wearing your finest frock in an abandoned warehouse in Paddington.
According to the Ticket Master report, a whopping 74% of London theatre audiences have dressed casually at the theatre. This was patently not the case when I was younger. When I went to musicals – for all my birthdays between the ages of eight and twelve - I wore the frilliest party dress possible. I might’ve felt special but I also felt awkward as hell. Nowadays, you’d be hard pressed to find a young audience member dressed smartly. London theatre is making fewer demands of its audience these days, barring the still ghastly ticket prices. It is becoming OK to go to theatre dressed as ourselves.
There’s one final survey finding, which caused me to yelp with glee. 31% of those questioned had read the script before attending a show and 61% sought out the text, following the performance.  This statistic, more than any other, speaks to me of the inestimable power and worth of theatre. How many audience members seek out a script after going to the cinema? Theatre gets people thinking, caring about and questioning language more than any other live art form. Fact.