'The Scottsboro Boys' or 'Theatre turned on its head.' 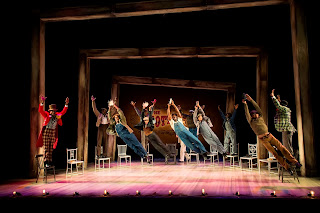 ‘The Scottsboro Boys’ is theatre turned inside out and upside down. This is such an ingeniously twisted musical that, by the end, you won’t know where to look, how to feel or if you’re breathing. Brave, bold and bloody brilliant.

The show (transferring from New York) is based on a real-life story about 9 black teenagers who, in 1931, were dragged off a box-cart heading to Memphis and falsely accused of rape. Crucially, director Susan Stroman and her gutsy company have chosen to frame this story within the minstrel show format – only with one gigantic twist.

The minstrel show traditionally involved white actors playing African Americans in a cheap and derogatory fashion.  With ‘Scottsboro Boys’, a predominantly black cast plays caricatured versions of white people, all in positions of power. What’s even more frightening is that these gruesome caricatures might not be as exaggerated as we’d like to think.

Every scene, performance and song pulses with ugly irony. There’s not a single stretched smile, plastered on the dancers’ faces, that doesn’t hurt to look at. There’s not one ‘light-hearted’ skit that doesn’t make you think twice. Every shake of the tambourine or waving of the wrists entertains on one level and appals on another.

The singing and dancing is particularly painful to watch. Lots of the songs (composed by John Kander, with biting lyrics from Fred Ebb) have an air of vaudeville about them. They are broad and upbeat and underscored by a peppy, regular beat. They are the type of songs that are designed to make you switch off and grin – except, within this inside-out format, they make you wince.

The regimented rhythm of these songs hints at a larger system or over-riding authority that these teenage boys cannot hope to overcome. They might be opening their mouths and waving their hands, but they’re singing to someone else’s beat. There is an inevitability about the music - an unwavering surge forward - that suggests the total lack of control these boys have over their fate.

The devastating impact of this higher authority and its destructive influence on both the music – and the boys singing and dancing to it – is exposed in the nightmarish number ‘Electric Chair’. Brilliant, free flowing tap dancing sequences are interspersed with jagged, stiff limbed dance routines, the prisoners stalking about the stage as Beowult Borritt’s set explodes with flashes of light. The freedom that dance and music provides is stopped in its track by those relentless electric jolts.

There are only a few songs in which the vaudeville style is dropped and simpler, more soulful music is introduced. These songs – such as ‘Nothin’ or ‘You Can’t Do Me’ - mark moments of pure hope or despair. Kyle Scatliffe, playing leader of the boys Haywood Patterson, sings with exquisite resolve and heart. It’s like hearing a canary bird sing over the top of a blazing, horrendous war.

The actors don’t flinch once, even though they’re asked to deliver lines that must make their souls recoil inside of them. I’m thinking particularly of Colman Domingo and Forrest McClendon who play the white sheriffs, all rickety limbed and sneering faces. They are horrific characters and Domingo and McClendon perform with total commitment, never allowing a smidgeon of humanity to wriggle into their roles.

Julian Glover compels as the show ring leader and narrator, who looks like he’s stepped right off the plantation field. It is the weirdest and slippiest of roles. There is a natural warmth about Glover that one is instinctively drawn to and, for a lot of the time, it feels like he’s the pseudo grandpa of the group. But he is also crystallised evil. There are little slips when Glover’s genial smile drops and his cruel, ingrained prejudices gleam out. You catch yourself, ashamed, warming to someone hateful.

There are so many moments in this show when the heart and head freezes; when you realise you’ve felt something you probably shouldn’t feel or thought something that makes you deeply uncomfortable. This is a show that forces you to question yourself and the world around you; you can’t ask for anything more than that.