'Beats' review or 'I just can't control my beat!' 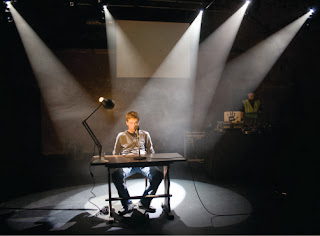 Young Johnno has taken a pill and the dance music is starting to take over his body. Here is how Kieran Hurley - one of the most gifted and poetical playwrights of his generation – describes this moment:

And without even noticing the music finds a flow through him, speaking straight to his body. Like it’s flowing through him but like he’s immersed in it at the same time, engulfing him in its immediacy, in its intimacy.

It’s a superb description of Johnno’s high – but this quotation also captures everything that is brilliant about Kieran Hurley’s latest play, ‘Beats’. This show will wriggle inside you like the deepest of dance beats, shuddering through your system. It is a stunning piece of theatre; immersive, exhilarating and utterly convincing.

There are only two performers in this production; Hurley, who recites and performs his play, and an on-stage DJ. A video artist also works back-stage and ensures that a large on-stage screen blazes constantly with psychedelic images. These three performers work instinctively together to create one of the most finely textured and dynamic shows I’ve seen. The images, music and script tumble into each other and bring out the most vibrant colours, characters and feelings.

Layered on top of all of this is the exquisite rhythms contained in Hurley’s script. This man is a poet. On one level, it shouldn’t surprise that this piece revolves around rhythm. After all, ‘Beats’ focuses on a Scottish teenage who, bored of playing Zelda in his bedroom, decides to sneak off to an illicit 90s rave with his friend. It’ll be one of the last of its kind since the government stands on the verge of outlawing all public raves. This is a play about music and the sway it holds, the hope, euphoria, understanding and connections it can create. But this play doesn’t just talk about music. It is music.

Hurley creeps into his characters heads and carefully extracts their defining rhythms. He even extracts the rhythms of the roads, the landscapes, the past and the future. Trapped alone in his room, with only a computer game for company – young Johnno, or at least the verse that describes young Johnno, is steady, repetitive and searching; ‘He sits in his bedroom, his bedroom/looking out the window at the dreich/evening, the orange sulphur street, the row of hedges,/the bitumen pavements, the dog shit.’

Johnno’s rhythms morph subtly as the night progresses. We experience the jittery excitement of the car-ride to the rave (‘Shut. The Fuck. Up!’), the stretched expanses of the landscape beyond the car window (‘And he imagines it as the living pulse of the tarmac, and the electricity pylons that flick past his eyes keeping time.’), the rush and swell of the drugs (‘All of us, he thinks. All of us together holding on, clinging on for dear life!’) and the frozen and juddering fear of the car-ride home with his frightened, angry mother.

There are endless subtleties within these major rhythm shifts. The music and images sometimes work with the rhythms of the speech, amplifying the beats and ideas (We see a picture of Ranvescraig Steelworks come tumbling to the ground, as a policeman fights with his dad about the future of Scotland). At other times, these images work against the words, tugging at their meaning and tussling with the ambiguities of language and perspective. And then there are the other characters: Johnno’s bickering friends, the surging crowd, the policeman who pops in and out of the play, haunted by his father and hunted down by a future he cannot reach.


Hurley’s script slides between these characters’ heads and we glide from fear to joy, depression, confusion, anger, despair and love. Hurley’s play allows us to channel these emotions easily and deeply; it’s as if the play is one great album, each character with his or her own hit track. The content and the message fuse brilliantly and it becomes impossible to tell when the music stops – and the soul begins.