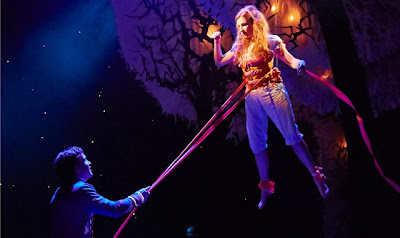 A floating princess who cannot cry. A cruel father who forces his daughter to smoke spliff. A magic lake packed with crazy creatures – and a score by Tori Amos. The Light Princess, directed by Marianne Elliott, is an exceptionally strange and ambitious new musical. It is probably too risky to ever transfer beyond The National Theatre’s subsidized stage and into the West End. Catch it whilst you can; you’ll never see anything quite like it again.
The hype leading up to this show has centred on Tori Amos, writer of hit albums such as Little Earthquakes and one of pop's most creative talents. Amos’s score was always going to be unusual and she has come up with something truly special for The Light Princess. Almost the entire script is sung and the melodies are romantic, wistful and powerful. This is a musical with real music.
The story is based on a Victorian fairytale and is suitably off-beat – if not a little convoluted. A rambling narrative (Samuel Adamson could’ve streamlined his book better) sets the scene:  the Kingdoms of Lagobel and Sealand are at War. It is down to each of the Kings' children – Princess Althea and Prince Digby – to lead their troops to victory. What’s the betting the two fall in love?
Every character is positively dripping in eccentricity. Althea (Rosalie Craig), the titular Light Princess, has only been able to float since her mother’s death. Her love interest, Digby (Nick Hendrix), has also lost his mother and has forgotten how to smile. Besides our two slightly batty lovers, there are also grey-faced men, splendid warriors, dragons, puppet birds and a legion of mystical animals. This is a world awash with bright colours and barmy creatures.
Rae Smith’s set is a cross between a children’s storybook, a Tim Burton film and War Horse. Beautiful cardboard cut-out silhouettes are accompanied by cartoonish projections and quirky puppetry. Our heroine – played with the most incredible energy, commitment and grace by Rosalie Craig – floats above the stage. She is assisted by a group of acrobats, who support, manoeuvre and carry Craig about the stage.
What with the acrobats, projections, detail-heavy plot and ethereal melodies, it is a lot to take in. One is used to switching off in musicals. Here, you need to stay switched on. The first half is a bit of a mess. Elliott’s directing is too busy and the fractured projections prove particularly distracting. The script is overstuffed and the odd plot twists, mystical locations and zany characters threaten to overwhelm.
Gradually, the plot starts to focus, the staging settles and the emotions crystallise.  The musical solidifies and darkens. Althea stands on a nearly bare stage, wearing a sparkling, Disney Princess wedding dress. A blazing duet between Althea and best friend Piper (Amy Booth-Steel) culminates with a harrowing image: Althea lifts up her dress and reveals her bleeding, braced legs. It is a horrendous moment, amplified by the ugly beauty of Amos’ exquisite score.
Later, Althea and Prince Darius meet amid huge dandelion-esque tress, a blue-sheet lake shimmering in front of them. Rosalie Craig and Nick Hendrix’s love scenes shimmer with tenderness, all the chaos of the opening numbers stripped away. ‘You are changing my world’ sings the Prince, as his Princess floats and dances above his head.
The Light Princess is not perfect. It is messy and muddled and often too clever for its own good. But there is real magic here; moments when the searching music, scorching singing and sumptuous visuals combine to create a piece of unforgettable theatre.