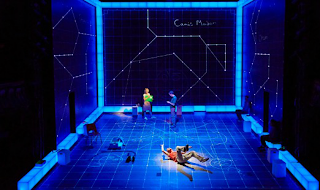 Why isn’t more being done to depict and explore disability on stage? Theatre strikes me as the perfect medium for such a purpose. This is because, in theatre, the stage and audience occupy the same space. Change the physical properties of that space – such as the sound or light levels – and the actors and audience are affected in similar ways. If there is a blackout, then we all become temporarily ‘blind’. If the sound is switched off, we all become ‘deaf’. Theatre can help us understand a disability on a physical, instinctive level.
Deafinitely Theatre is a Deaf-Led theatre company, which uses theatre to bring the deaf and hearing community together. This company is acutely aware of the way in which theatre’s shared space can help promote mutual understanding.
Deafinitely Theatre’s latest show is a thoughtful adaptation of Jim Cartright’s pub-based comedy Two. The largely silent opening section plays around with the divide between the deaf and hearing world. The actors, all with varying degrees of deafness, use British Sign Language, facial expressions, grunts and whispers, to communicate with each other. They occupy a space that we, the hearing section of the audience, cannot reach. We feel removed and hard done by, cut off from a world just a few feet away.
As the show progresses, a divide opens up between the deaf and hearing members in the audience. The spoken word and accompanying sign language fall out of sync and sections of the audience laugh at different moments, responding to their own language. Although we share the same space and have chosen to watch the shame show, this separation between the two communities persists. One starts to think about what can and cannot be done to pull these two groups together.
There are other ways theatre can be used to encourage public debate about disability. A Curious Incident of a Dog in the Night-Time, first a novel and now a hit show, has done a great deal to increase public awareness of autism. Mark Haddon’s original novel used a first person narrative to help readers get inside the head of Christopher Boone, a young boy with Asperger syndrome – or high-functioning autism. Marianne Elliott’s ingenious production uses the stage.
Elliott’s inventive staging helps the audience to understand autism on a subconscious level. The design is open plan, the rooms and buildings on stage separated by strips of light rather than by walls. This staging highlights the difficulty that autistics have with identifying boundaries and how hard it is not to cross these lines, when all those walls and divides simply do not register.
Autistics often find human contact really difficult, perhaps because of their struggle to recognise physical, psychological or social boundaries. In Elliott’s production, whenever someone hugs or – much worse – strikes Christopher, the stage flares up with light and sound. Human contact, be it affectionate or threatening, is represented as something dangerous and startling.
Elliott’s production also explores how consumed autistics can become by their own interests. Christopher is fascinated by trains and, throughout the production, he carefully builds a train set that eventually wraps around the whole stage. His interest defines and demarcates his whole world. Chris is also fascinated by astrology and, late in the show, a twinkling projection of stars floods the stage and sweeps into the audience. We all experience that pure and enveloping passion together.
Theatre can also promote discussion simply by hiring more disabled actors. Sean Holmes’ Secret Theatre season at the Lyric Hammersmith uses a richly varied ensemble cast, including Nadia Albina  who was born with her right fore-arm missing. Albina’s disability is rarely acknowledged except for one powerful moment in Show 3. Albina plays a prison warden who is furiously berated by a Governor for messing up a lethal injection. The Governor directly blames the warden’s disability, which has otherwise not been acknowledged. It is such an awkward moment and one has no idea where to look or what to feel, where the play ends and real life begins.
It all sounds rather brilliant and revelatory, doesn’t it? It really is. Let’s hope the recent extension of the Relaxed Performance Pilot Project, in which shows are adapted for children with disabilities, marks the start of a much wider trend. It is too good an opportunity to miss.