'The Events' review or 'Human hope humming in the ears.' 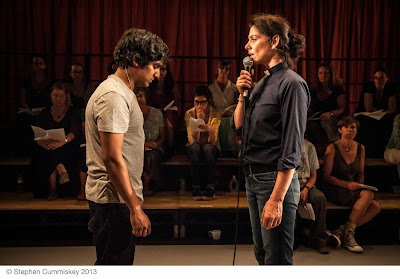 A story about a psychopath who shoots down a Scottish community choir - with songs. David Greig has always combined form and content in peculiarly inventive ways. He’s given us a mystical play set in a real-life bar (The Strange Undoing of Prudencia Hart), a romantic musical which is really a play (Midsummer) and a quirky children’s story turned West End juggernaut (Charlie and the Chocolate Factory). The Events showcases Greig at the height of his powers and is a supple, subtle and deeply moving show.

Chloe Lamford’s unfussy set reflects the modest charm of a local church hall: a tea urn sits on a table, a few benches flank the back wall and a community choir huddles around a piano. Their singing is heartfelt but not slick, their clothes do not look like costumes and they read from scripts. There is an air of human fallibility about Ramin Gray’s delicately-tuned production that makes it feel exceptionally truthful.
Gradually, a sliver of fear wriggles free from this cheering scene. Priest and choir leader, Claire (Neve McIntosh), seems strained and distracted by a young man (Rudi Dharmalingam) who hovers silently to the side of the stage. The singing stops abruptly and the man speaks. He envisions a fleet of ships heading towards Australia, packed with the country's first immigrants. He imagines what he would do to them: ‘You would stand on the rocks, point at the ships and say kill them. Kill them all.’
This is one of umpteen chilling moments in a play that slides restlessly between the mind of a killer and his victims. Using Claire (played with blazing bewilderment by McIntosh) as a mouthpiece, Greig’s play asks ‘Why’ and ‘How’. It also pitches that most frightening of questions, which we asked after Columbine, Dunblane or Breivik’s attack in Norway: ‘Can a psychopath still be human?’
Alongside his witty and nimble script, Greig uses a range of theatrical tricks to ask explore the aftermath of the shooting. Rudi Dharmalingam plays the anonymous killer but he also enacts countless other roles.  He is Claire’s lover, her colleagues, the killer’s father, a cowardly politician or cynical journalist. Claire is forced to see the killer’s face everywhere she looks.
Dharmalingam plays most of the characters with a mechanical neutrality and delivers their lines in muted tones. Those people implicated by the shooter’s actions – his father, the racist politician or provocative journalist – are also portrayed as flat and fairly lifeless. We are reminded that it isn’t just the killer who is rendered inhuman in the wake of such a tragedy.
The only role Dharmalingam injects with colour is that of the killer. At one point, the play slips into the style of a TV show and the shooter fields questions from the audience. We laugh with him, as he chuckles at the audience’s inane questions. Later on, the killer sings his own motivational song and runs through the audience, encouraging us to shake his hand. Greig invites us to smile and side with the shooter and it is a hellishly uncomfortable place to be.
The play never dramatizes the shooting but its presence builds gradually until it cloaks the production. Deep into the show, the choir sings the angelic hymn How Great Thou Art. Claire stops the singers and asks them to hum the music rather than sound the words. Her faith is breaking, but a human warmth swells up from the hymn, regardless. As this priest looks at her seated choir it feels – for a second – like she is standing in a graveyard surrounded by headstones, hope humming persistently in her ears.