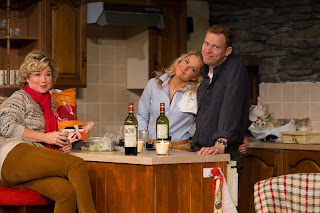 Three middle class couples retreat to a Welsh cottage for a weekend in search of a little peace and romance. But they didn’t count on the demented farmer next door and randy teenager Tabby! Actor Simon Paisley Day’s new comedy, ‘Raving’, stars Robert Webb and Tamzin Outhwaite and, in theory, has Hampstead Theatre box-office gold written all over it. If only it were funnier.

There’s something of the TV Studio record about Edward Hall’s slick but superficial production. Jonathan Fensom’s set looks like it has been nabbed from a sitcom, as if the stone wall cottage has been made out of plastic. The script and performances feel plastic-y too; shiny and attractive but lacking in substance.

Clichés crowd in from every direction. Tamzin Outhwaite plays run-down mother Briony who suffers from depression and is still breast-feeding her 3 year old son. She spends most of her time grabbing at her leaky breasts and crying. Barnaby Kay, as Outhwaite’s long-suffering husband Keith, mostly hides in the bedroom. The biggest laughs of the night come from a running gag, which involves the bedroom door getting stuck – again and again.

Robert Webb’s character, the smug and self-deluded Ross, is an amped up version of his Peep Show persona. He and his wife, Rosy (Sarah Hadland) are the type of couple who cue each other in whilst in conversation.  Webb’s strength has always been his understated ghastliness but he’s a little too low-key for this brazen show. His performance is all in his jittery eyes but it’s hard to see them, sitting a few rows back in the theatre.

Issy Van Randwyck is the show’s knock-out star, with the most hideous yet humane performance of the night. She plays the type of spoilt soul who has never had to take life seriously. She considers her career as a doctor to be a ‘hobby’ and says ‘fuck’ as often as she can. Yet despite this there is a wisdom about Randwyck’s character; as if she has come about all this silliness after a lot of serious thinking.

Poor old Bel Powley - who was gifted a plum of a role in April De Angelis’ play ‘Jumpy’ – is required mainly to strip off and screech, as moody teenager Tabby. This is less a role and more a slouching tangle of limbs.

All this might be forgiven were ‘Raving’ packed with cracking jokes but Paisley Day’s script is flabby. Limited dramatic scenarios are stretched beyond breaking point and, when the jokes come, they are rarely sharp enough; ‘You let nature dictate/Emphasis on the dick.’

There are a few fine physical gags, such as when a grown man furtively licks a teenager’s leg or a husband gratefully sucks on a bottle of his wife’s breast-milk. But it isn’t enough. Near the end, as a dramatic denouement is being dragged out for far too long, one character points out: ‘In a minute, one of us is going to get extremely bored of this and stand up.’ Spot on.