Music for a King: Scoring Shakespeare 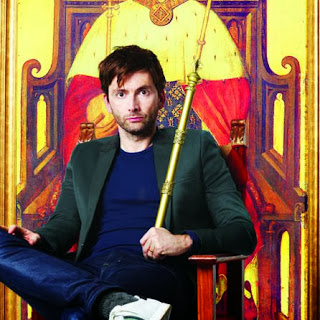 As the Royal Shakespeare Company releases a CD of music and speeches from its new production of Richard II, the score's composer Paul Englishby speaks about the challenges of writing for live theatre.

How closely do you work with RSC director Gregory Doran? How much did your composition change throughout the rehearsal process for Richard II?

Greg Doran and I will have a chat before we start rehearsals about the aesthetic and atmosphere of the whole piece. A couple of weeks into rehearsals, we will sit down with the script and go through specific points: where do we want music and where will the scene changes arise? But the whole piece marinates over a much longer period of time. I don’t start from scratch with two weeks to go – I know the feeling of the play before I begin.

What is the basic structure of your production score?

I’m working with three trumpets, three sopranos, percussion and keyboards. What I tried to do is capture the divine right of the monarch – which was an obsession of Richard II – alongside the military might of Bolingbroke. Those two different textures are at my disposal. I switch from one to another, morphing from angelic voices into a militaristic brash sound.

How do you reflect the rise and fall of Richard II in your score?

I tried to write music that angels might sing because Richard genuinely feels that the monarch is divinely chosen and the angles are on his side. I wrote quite virtuosic soprano music, which is almost superhuman, to get that sense of divine majesty. Then the trumpets come in and Bolingbroke’s earthy, military presence gradually takes over. The threat to Richard’s throne starts with a tiny fanfare that brings on Bolingbroke at the beginning. This fanfare gradually develops. By the end of the play, the music has become an incredibly powerful, mighty version of that first trumpet call and Bolingbroke has become Henry IV.

You write a lot for film and TV and recently worked on Luther. What's different about composing for theatre?

There are a lot of practical matters with theatre. You only really find out in the technical rehearsals how long the show and score will last. A lot gets changed. I tend to write too much music with a view to cutting it down later, without spoiling the music. Theatre is also much more fluid. When I write music for TV or film, you generally have a locked picture. You’re scoring something that is set in stone. In theatre, you are commanded by the text. You have to think on the spot and build your piece throughout the rehearsal process.

You’ve worked on a huge number of RSC productions. What attracts you to Shakespeare’s work?

I’m lucky enough to work with Gregory Doran and it’s an incredible experience and an education. You get to know these plays so well. Shakespeare is not the easiest playwright to read on the page but being part of the rehearsal – hearing these words come alive and really getting to know the poetry of the pieces – is amazing. Before this rehearsal process, I didn’t know Richard II well but the play has come alive for me now. It is a fantastic thriller, but also one of the most poetic of Shakespeare’s plays.

How do you feel about the RSC creating an album of your score for Richard II?

In the past I’ve done shows and once they close, that’s it for the music. So it’s brilliant from a composer’s point of view to have a quality recording of the music.

Which track do you think best reflects this production?

Lachrimosa. This piece begins the show and is part of a Requiem songbook I wrote for the production. We open with Gloucester’s coffin and his death echoes throughout the whole show. We start the pre-show with three sopranos singing, so you feel immersed before the play begins. Then the Lachrimosa starts. It has a touch of mournful suffering, which I think is really effective.

Vaughan Williams also makes an appearance on the album. What’s he doing in there?

The RSC have been digging through the archives and found some incredible music. The Vaughan Williams music is from a 1913 production of Richard II. VW is starting to enter his pastoral phase with these pieces. It is simple music but beautiful string writing. We’re hoping to go through the whole canon of Shakespeare’s plays over the next few years at the RSC. There will be original music with each of these new productions but the subsequent albums will also include archive music from RSC productions over the last 100 years. It should be a lovely memento and a brilliant historical resource.
Miriam Gillinson reviews for Time Out and The Ham & High. She blogs for Blouin Art Info UK, Guardian Professionals and scouts scripts for Sonia Friedman Productions.