'Secret Theatre Show 3' review or 'Time to tear this theatre to shreds!' 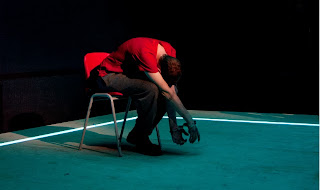 The first two shows in Sean Holmes’ brave new venture, Secret Theatre, have been jagged takes on classic plays. They’ve been intriguing but brittle productions, pumped full of cool energy but on the verge of shattering completely. Show 3 is a different story. It is a ‘pitch black’ new comedy by Caroline Bird and is a startling, hilarious, swaggering piece of theatre.
There’s not a moment in this show that feels ‘safe’ and it’s the first time the element of surprise behind the Lyric Hammersmith’s Secret Theatre season feels useful. The fact one has heard nothing about this new play, and has no idea where it might veer next, makes it all the more unnerving. If you want to hold on to that element of risk, you best stop reading this review.
We open on a stage (designed with cool economy by Paul Wills) that prickles with danger and feels slightly futuristic, with its cold colours and sparse spaces. An elevated hospital bed, rigged up with restraints, is positioned opposite a row of stark red chairs. It looks like a theatre of torture but is in fact an execution chamber. This is Britain sometime in the near future and it isn't pretty.

The tone of Holmes’ production see-saws about at a sickening and thrilling pace. Silly verbal gags jostle alongside instances of distilled horror and painful lyricism (‘I’ve got screams shining out of my eyes!'). In the opening scene, as criminal Richard Sanger is executed, one warden snaps at her colleague to count in her head whilst administering the lethal injections. With every whisper and injection we giggle, awkward as hell.

Then the execution goes wrong and Bird’s satire grows positively nihilistic. The ambitious Governor (Cara Horgan) tries desperately to find some way to murder her murderer. The cowardly doctor (Steven Webb) does everything he can to avoid being a doctor; the spiritual advisor (Sergo Vares) spends most of his time humming and eating and the freelance journalist (Adelle Leonce) tries to extract a story from the sister of the criminal’s victim.
Sean Holmes’ teasing direction gently tears at the fabric of the show. Easy and rhythmic songs, such as Jackson’s Five, play over the scene changes and dare us to relax. In one scene change, the set is cleared away by the Governor with such ferocity that it feels like the actress – rather than the character – is angry.
Holmes also highlights the connections between the stage and audience. Before the show begins, the spiritual advisor sits down on a chair and sucks on a sweet; he is watching the ‘show’ along with us. In another gutsy piece of staging, Holmes has an actor storm through the back wall and reveal the backstage. Quietly and subtly, Holmes messes with the idea of artifice and draws the play and audience closer together.
Alas, the play does run out of steam about half way through. With such bottomed out characters and an amped up plot, it feels like there’s nowhere left to go. But there is one final rupture in this production that rips the bottom right out of the play and even the auditorium. It is one of the most audacious moments I’ve ever seen in the theatre and it was all I could do not to stand up and applaud. Bravo, Secret Theatre. Bravo!