'The World of Extreme Happiness' review or 'I'm not sure I want the cuddly toy after all.' 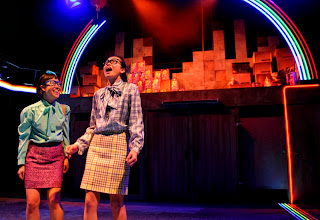 Michael Longhurst is one of the most versatile and expressive directors of his generation. What he does, better than anyone else, is to recognise and release the essential flavour of a script. One of Longhurst’s first productions, Stovepipe, was as fraught and dangerous as Adam Brace’s grenade of a play. His production of ‘Constellations’ shimmered with delicate meaning and perfectly encapsulated the winking profundity of Payne’s writing.

Now, with his first production at The Shed, Longhurst has chosen to play ‘The World of Extreme Happiness’ as an endless, oddly glinting daydream. Not quite real life, not quite fantasy, this show stays faithful to the bold eccentricity of Frances  Ya-Chu Cowhig’s writing. The production is charged with a sort of garish optimism and reflects the savage hope and despair that China’s selective prosperity has brought about.

There’s a touch of the Wizard of Oz to this show, both in design and plot. An exceptional girl, Sunny (Katie Leung), sets off from the countryside to the city, in search of factory work. She meets friends and foes along the way but is ultimately dumped back into reality with one hell of a thud. Chloe Lamford’s set nudges at the Oz parallels; a neon rainbow arches above the stage, behind which stands a precarious pyramid of packaged, glowing baby dolls. This is the factory and mecca that Sunny has been searching for, only it is sinister and threatening and, raised above the stage, just out of reach.

There is a determinedly off-beat feel to this production that lends it a peculiar authenticity. Sunny’s father (Daniel York – ghastly but with a shadow of humanity clinging to him) sings a Celine Dion songs to a live pigeon, cradled in his hands. A mother drugs her son in order to stop him striking. Sunny is nearly married off to a ghost, an altar lit up with cheerful fairylights. Sunny’s friend (Vera Chok) at the factory is so focused on success that any common sense has leaked right out of her. This is a country on the edge, driven mad by the famine, by the one child policy and the terrible gulf between the ‘city people’ and rural farmers.

There are a few extraordinary scenes when the play stops hovering above the horror and fear and pain and dives right in. Real emotions are released so rarely in this restlessly eclectic show that, when they come, they hurt. Deep into the play, a janitor (Junix Inocian) remembers the devastation caused by the Great Chinese Famine. He talks of babies’ throats being slit beneath bashful blankets, a white hot rage quietly seeping out of his every pore.

Admittedly, this play does begin to splinter a little under its own weight. There are so many plot threads to handle and so many strange excursions, that the brain struggles to keep up. But it is also a brave, captivating and unique; a powerful confirmation of the vital strength of the individual voice. 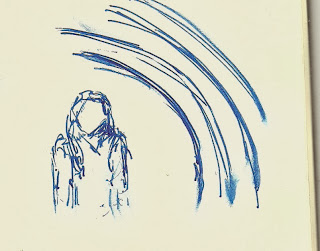