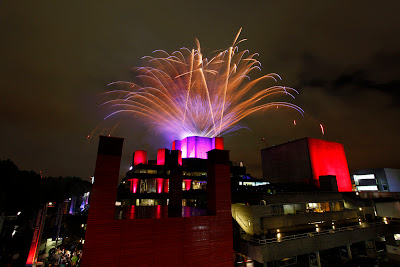 This Tuesday, the National Theatre (or Royal National Theatre/Nash) turned 50 years old. I’m positively spritely in comparison and, as such, cannot hope to reflect on The National’s early years. If you’re looking for that sort of thing, you should read Michael Billington’s excellent Guardian piece.
Nevertheless, the National has played a huge part in my life in the theatre. This is the building that, time and again, reminds me why I got into this brilliant and baffling industry in the first place. Below are some of my best and worst memories of the National, big old beautiful monstrosity that it is.
1. This is where I learned to hate/love theatre
In 2006, before I started reviewing in earnest, I went to see Katie Mitchell’s experimental adaptation of Virginia Woolf’s The Waves. It was a deeply sophisticated show, which involved screens, foley artists, flashes of prose, snatched images and a total absence of concrete meaning. I hated it.
How I have held onto that passionate reaction ever since! I might have loathed Waves but Mitchell’s production forced me to unpick exactly why I reacted so violently against the show. It piqued my critical faculty and helped me realise how instinctively and deeply I care about theatre.
2. I learned the real meaning of theatrical transformation
Everyone says theatre is a transformative medium but most of the time this sounds like hogwash. Just occasionally, though, these platitudes come true.
War Horse reminded me that theatre is basically magic. At some point during War Horse – the WWI puppetry phenomenon – one stops seeing the men controlling the puppets and starts to believe the animals are moving independently. Put simply, The National has made me believe in magic.
3. I fell in love with new writing
Simon Stephens’ play Harper Regan (2008) introduced me to a new type of theatre. Lit up by a stunning central performance from Lesley Sharp, this play was odd, unreachable, fiery, surprising and modern as hell. It felt like the closest thing to real life and real feelings I had ever seen on stage.
This show – strange and powerful and completely its own creation - sparked a love for new-writing that has fuelled my career in theatre. Praise ye theatre gods for the subsidy, insight, imagination and courage that brought it into being.
4. I felt real fire
I’m not convinced Danny Boyle is a brilliant theatre director but, damn, can he stage an event. In 2011, Boyle directed Frankenstein and made the Olivier stage blaze. A huge strip of light bulbs hovered above the audience. At pivotal moments in the production – scenes where creation, danger or death lurked close by – the bulbs flared into life. The heat jolted right through me and I experienced, distilled and pure, the visceral power of theatre.
5. Musical theatre changed forever
London Road – a verbatim musical about the Ipswich murders – changed the face of musical theatre. A turbulently inventive show, London Road merged horror and panache in ways previously unimaginable.
The colour, energy, swagger and slap-in-the-face emotion of future-National-boss Rufus Norris’ production! I went into this show believing musical theatre to be a thrilling but self-contained genre. I left feeling short-sighted, naive and exhilarated about where theatre might twist or turn next.
6. Theatre blew all the other mediums out the water
All the theatrical stars aligned perfectly with A Curious Incident of the Dog in the Night-Time. Marianne Elliott’s dynamic direction, Simon Stephens’ instinctive adaptation and Luke Treadaway’s inspired performance combined to create something special and uniquely theatrical.
In some unforgettable moments (such as when Chris’ passion for astronomy spills out into the auditorium in the form of a projected starscape that swoops over the audience), Curious Incident didn’t just show us what it is to live with autism – it allowed us to experience it for ourselves.
7. I fell in and out of love with Shakespeare
The brilliant thing about Shakespeare at The National is that it doesn’t feel sacred. Outgoing Artistic Director Nick Hytner has admitted to being frequently baffled at the beginning of a Shakespeare play, as has recent Shakespearean convert Lenny Henry. The National is where I go to grapple with Shakespeare without being afraid of looking stupid.
******************
I go to the National to feel challenged but not intimated, to have heated discussions about theatre without feeling judged. It is where I feel most connected with London’s theatrical past – and (on the very best nights) deeply excited about its future. It is also, without a doubt, the hardest building to navigate in the whole damn world. Here's to countless years getting lost inside its hallowed walls!