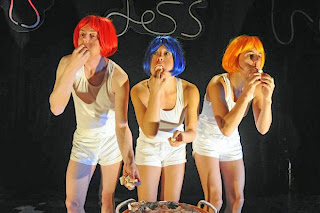 There are moments of deep pain and vulnerability in Made in China’s ‘Gym Party’ that lodge in the mind, teasing and troubling. There are funny ‘games’ involving skittles, spit and dancing and flashes of memory which make one wince. But the driving idea behind this show – that competition has ugly consequences – is explored so relentlessly that it starts to wear a little thin.

This is the type of cleverly constructed and highly self-aware show that is bundled up in contradictions. Three performers – Chris (Bailey), Jess (Latowicki) and Ira (Brand) – stand in front of electric lights, bearing their names. These actors will work together but only one will ultimately ‘win’.  These actors will be performing, only they are sort of playing themselves (plus whacky wigs). They will be engaging with the audience – but only so they can ask us to turn against them in the final stages of the show.

These paradoxes are explained in a tumble of words that begins the show. The actors deliver their lines with forced naiveté, encouraging us to recognise the complexities hidden behind this steady flow of words. Each performer adopts a forced expression. There are strained smiles, shifty eyes or blank gazes. It all feels a touch overworked; as if every word has been turned inside out and layered over, until it resonates with optimum levels of meaning. One can sense the show trying very hard.

‘Gym Party’ is at its most profound when it is pared down and playful. The three actors play a series of games in order to decide the ‘winner’ of the show. As they enact a number of stunts – stuffing marshmallows in their mouth, catching skittles or dancing with books balanced on their heads – the absurdity of mindless competition wriggles free. The gang perform the type of silly dance you might dream up in your bedroom as a teenager. They leap about the stage with the stern expressions on their faces; look what happens when you take the silly stuff seriously.

The games and dances shudder with delicate meaning. There are also particularly sensitive scenes which glance, indirectly, at school life and the competitive instinct this engenders at an early age. We see a glimpse of the school disco or canteen and the competition and isolation innate to all these early activities. The playful games and ‘real’ memories merge provocatively together.

But it is the darkest moments in this show which, for me, don’t quite click. I’m not convinced these shocking moments resonate for the right reasons. At the end of each game, the losers are forced to carry out increasingly extreme punishments. The actors punch themselves – hard – on the chest. They assassinate each other’s character or appearance. For me, these moments feel cheap, especially within the context of a show that is otherwise more unusual and indirect. How’s that for an ultimate irony? In attempting to ‘win’ their show – to punch the audience between the eyes – ‘Made in China’ have diminished the power of their production.