'Ghosts' review or 'Who's up for a mass burial?' 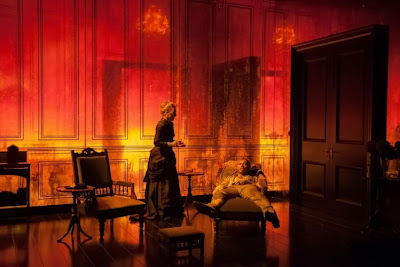 Brace yourselves. This version of Ibsen’s ‘Ghosts’ (1881) is unrelenting. There is no interval and few scene changes, except for the lights dimming on an already gloomy stage. Tim Hatley's gorgeous set, with its misty glass windows and shadowy beauty, is hemmed in by huge black doors. It's like being trapped inside an enormous coffin.

Lesley Manville – never an actress to shy away from sorrow – stars as the long-widowed and long-suffering Helene Alving. With her hair swept up and glasses perched on her nose, she resembles an impossibly elegant headmistress. Manville’s Helene is alert and stern but also crackles with a deeply buried sense of the absurd.

The play opens with the return of Helene's long-absent son, Oswald (Jack Lowden). Oswald is a young painter and, according to local Pastor (Will Keen), has been 'tainted' by a life spent in artistic pursuits. Lowden certainly looks beaten; like Freddie Flintoff with all the sparkle knocked out of him.

Richard Eyre cultivates a fascinating chemistry among the pious pastor, life-loving Oswald and conflicted Helene. Will Keen's voice is dim and dark; the product of a life spent with his head bowed and the world avidly listening. As Keen's Pastor advises Helene about her patronage of the local orphanage, he rests his hand softly on a model of the building. It's as if he has taken up the position of god, hovering above the tiny world below.

Manville's perfomance is fascinatingly fluid. She is initially stiff and brusque, as if frozen from the inside out by her dead husband’s cruel behavior. But the return of Oswald begins to thaw Helene out. When Manville laughs it doesn't feel like an expression of joy – but a release of sorrow. It's an odd, icy happiness that makes one shiver.

Richard Eyre occasionally over-eggs an already hefty pudding. There's a bit too much 'dramatic' red lighting and the sick-bed conclusion feels hammy. But this is still a devastating show and a brilliant study of the corrosive impact of self-preservation.