'The Pass' review or 'You sure you can play with that achilles' heel?' 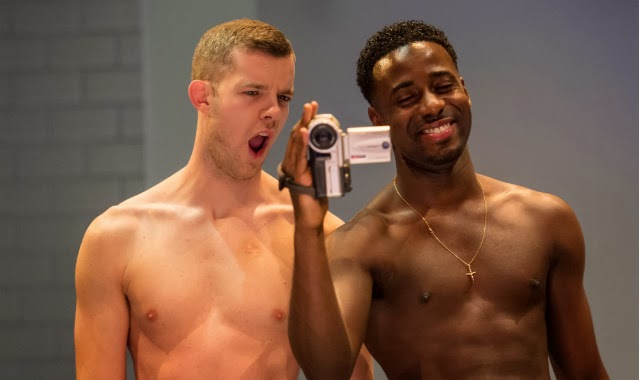 Homosexuality in sport has hit the headlines recently: Tom Daley came out via a You Tube video and former West Ham footballer Hitzlsperger also announced he was gay. But two high profile ‘outings’ do not an enlightened arena make. The issue of homosexuality and sport is still a (hugely) thorny one and is explored with unflinching honesty in John Donnelly’s sharp new play, The Pass.
Russell Tovey plays footballer Jason, a homosexual who refuses to come out even to himself. Jason and fellow footballer Ade (Gary Carr) are on the verge of turning professional. Tomorrow is the big game, which will determine which lad makes the team. Pumped up on protein shakes and dressed only in their boxers, the two skip, shower, tussle and tease each other late into the night.
‘I can see your billy bollocks’, cries out Tovey’s Jason to a loosely robed Ade. Director John Tiffany creates a gentle chemistry between the two, which feels exciting and open and rarely uncomfortable. Tovey’s Jason is cheeky and impulsive, his eyes sparkling and voice light. It is the competition between these two team-mates, rather than the unspoken attraction, which creates the few tense jolts.

Following a steamy shower scene (there’s a lot of naked bums in this show), the action jumps forward. Jason is now a successful footballer but the spark has gone from his voice, the liveliness drained from his limbs. The warmth of the first scene is replaced with something cold, flat and combative, as Jason warily spars with double-crossing pole dancer, Lyndsey (Lisa McGrills).

It is sad and convincing, as we watch Jason’s success – and the false public image that comes with it – gradually chip away at his soul. But Donnelly pushes things a little too far, as his play grows increasingly surreal. Jason’s character, once broken but believable, begins to verge on psychotic.
In a final and heightened scene (made more so by some odd slow-mo’s from director John Tiffany), Jason invites his old friend Ade back to his hotel room. Things get wild – really wild. It’s certainly fun to watch, as a drugged up Jason trashes his hotel room and turns on his friend. But the play starts to feel forced. The relationship between Jason and Ade curdles into something hard and functional and we’re never shows the pain beneath Jason’s brittle bravado. There are some sweet passes in this play – but it’s not quite the premier league clash I was hoping for.