'Fiji Land' review or 'I think these plants have gone a bit potty.' 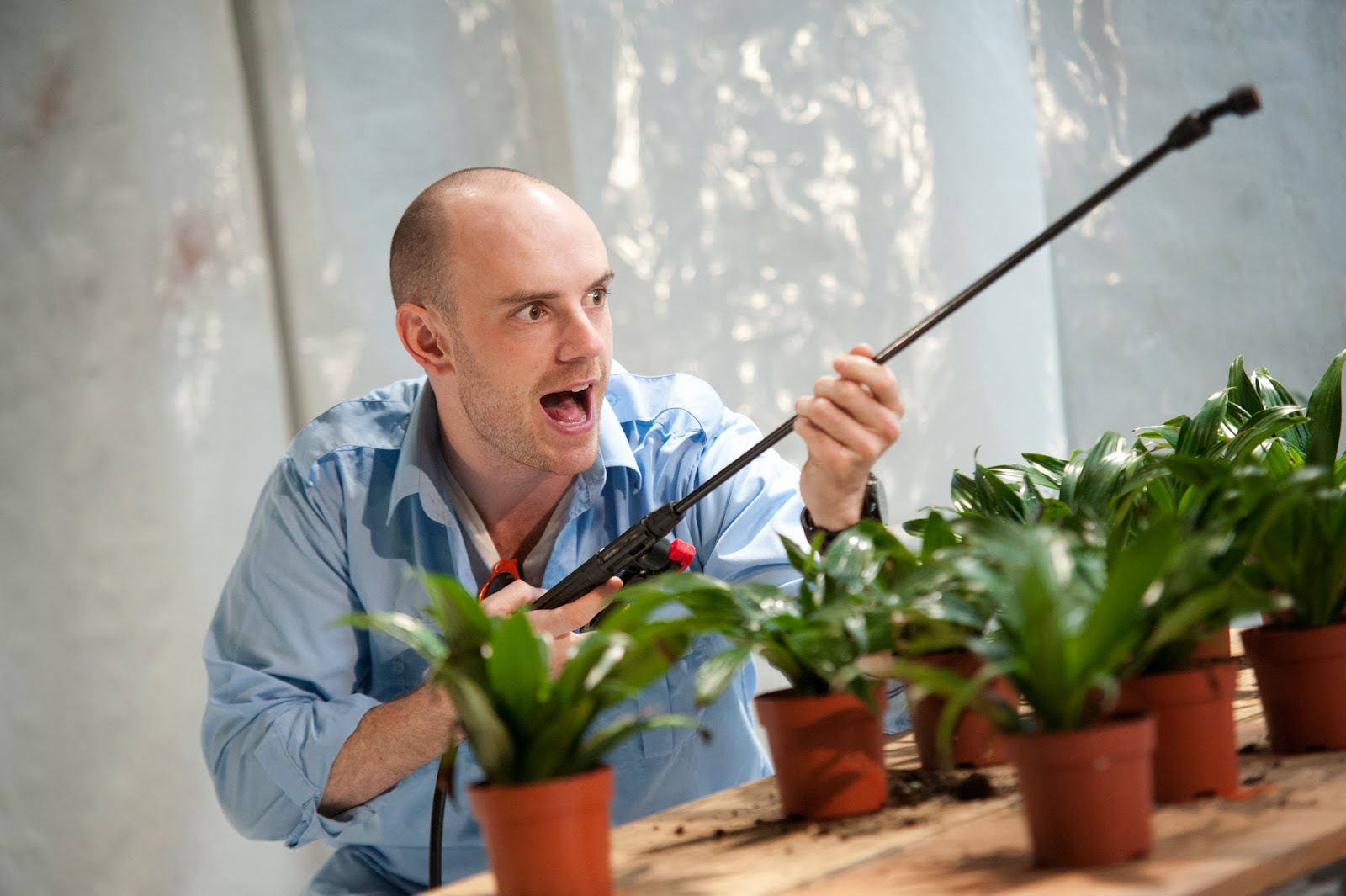 ‘Fiji land’ features plants which are really prisoners. It revolves around three prison wardens, one who is freezing to death, another who’s sweating buckets and a final chap who likes to do horrible things to his potted prisoners. There’s eye gauging, endless plant abuse and the slow and demented construction of an igloo. Crackers, imaginative, wild, seriously flawed – and the work of an original.

Nick Gill marks himself out as a rare, free spirit. However, his writing – restless and a bit erratic in this instance – requires a very steady hand. It feels like director Alice Malin’s production hasn’t landed yet. Half screw ball and half serious, the production never settles. One spends half the time looking for solid meaning and the rest, laughing and letting go.

The show’s context remains vague for a very long time – and then suddenly turns far too concrete. It doesn’t help that Ruth Hall’s set looks like a marijuana tent, with strip lighting and regimented rows of plants. Instead of teasing us with a reality just out of reach, this set misleads. We start looking for the wrong answers in the wrong places.

The dialogue is also misleading. At the beginning, Gill drops his characters into a blank horizon. There are absolutely no facts. When new prison officer Grainer (Jake Ferretti) arrives on the scene, he is greeted thus: ‘I’m the first guy – you’re the other guy.’ We don’t know who these characters are, what they are doing and where they are doing it.

So we settle in for a surreal play, which will provide its truths in weird, stabbing moments of meaning. But this isn’t quite what happens. Instead, Gill introduces incongruently lucid speeches. We learn about the real context of ‘Fiji-land’ not through a slow, steady grasping of reality that hides behind all this shimmering weirdness – but through odd spells of informed and persuasive discussion. The penny drops in the wrong way.

So, warden number two (Matthew Trevannion) begins discussing the economics of war and the fact that it is in the manufacturers’ and war generals’ interests to keep the war going. These pockets of sense make nonsense of the more obscure moments. There’s a much more coherent play nestling in here – if only Gill had just resisted the urge to clarify his thinking.

A physical play runs alongside this patchy dialogue – and it is this aspect of the production which compels and provokes. One of the wardens freezes, whilst another gets hotter and hotter. Is this perhaps something to do with their respective denial about the purpose of the prison ovens? The quietest warden (Stephen Bisland) waters, feeds and delicately chops the plants. It is an odd and disconcerting mixture of care, precision and cruelty. When these gestures get to explicit (and one point the warden subjects a plant to water-boarding) they stop working so well.