'Quidam' or 'Send in the spinning clowns!' 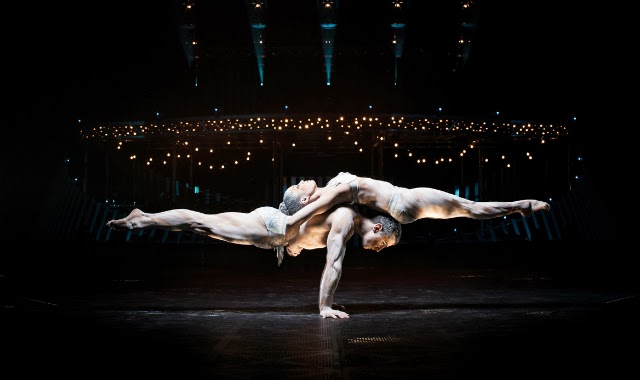 There are no animals in Cirque Du Soleil’s acrobatic show, Quidam, but I’m not convinced these performers are human. This wildly talented troupe can bend their bodies to their will. Statue artists twist their limbs into impossible contortions, gymnasts perform handstands on each other’s shoulders and aerial artists dare gravity to do its worst. Normal physical limits do not apply.
Cirque Du Soleil is a juggernaut of a performing troupe; last year they performed to nearly 15 million people. Quidam returns to the Royal Albert Hall for the second time and includes all of this multinational troupe’s defining acts: dizzying aerial feats, elastic gymnastics, pulsing live music and some slightly creepy clowning.
A scant story holds the show together. Lonely young Zoe (Alessandra Gonzalez) sits at home, bored, with her quiet mother and grey-suited father. Suddenly real-life disappears (the props literally float away) and a headless man, along with his other eclectic friends, glides through a suspended door. Mediocrity is banished and the magic begins.

It is the most dangerous acts that dazzle the most. The ceiling in the Royal Albert Hall is very high and the performers dangle from neck-arching heights. Julie Cameron’s aerial contortions in silk are a painful joy to watch. Cameron shimmies up and down a red velvety sheet, twisting and bending, scurrying up and swooshing down. The audience will her to greater heights, just as they wish her to finish her act and glide safely off-stage.

Little Zoe watches as a group of aerial hoop performers (Danila Bim, Lais Camial, Lisa Skinner) swing above her. It is an exceptionally graceful and fluid performance. Any sense of danger is banished and, instead, a youthful exuberance takes over; it is like watching all those wild dreams we had when were young, realised in the flesh.
I could’ve done without the audience interaction sections, led by sinister ringleader John (Mark Ward). In fact, it was at such moments that I wished I wasn’t sitting in the plum press seats, right in the thick of the action. But other souls, braver than myself, relished this chance to engage with the show. A Clown Cinema act from Toto Castineiras saw three audience members snog, slap and shoot each other. Mortifying but (sort of) fun.
Despite the incredible acts which swirled above our heads, it is when the action slowed down and the music dimmed that Quidam really took off. Performing at impossibly slow speeds, their bodies trembling with the effort, statue artists Yves Decoste and Valentyna Sidenko silently stole the show. Never losing contact for a moment, these two performers merged their bodies until two sets of limbs became one. Breath-taking and just a little bit shaming. Who’s up for renewing their gym membership?