'Happy Days' review or 'A very bad day at the beach!' 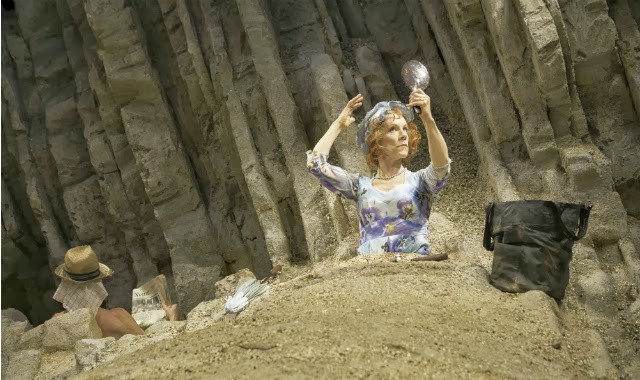 Just how buried did Samuel Beckett want his Winnie to be? The original stage directions in Happy Days are typically terse: ‘Embedded up to above her waist in exact centre of mound, Winnie.’ In 2007, Fiona Shaw’s Winnie was trapped in a sprawling rocky outcrop. In director Natalie Abrahami’s current production, Juliet Stevenson is sealed within a sandy mound, possibly at the bottom of a cliff. It’s hard to shake off the impression that Stevenson’s Winnie is merely having a jolly bad day at the seaside.
The thrust stage at The Young Vic Theatre doesn’t help. In Fiona Shaw’s National Theatre production, Tom Pye’s rocky crop spread into the wings and as far as the eye could see. It was the whole world and Winnie was at its centre. In this case, Vicki Mortimer’s set is primly cropped at both sides, which lends Winnie’s entrapment a rather temporary feel. It isn’t hugely intimidating or frightening; a real shame, since Beckett considered Winnie’s entrapment the worst predicament imaginable. It feels like Winnie, if only she tugged a little harder, could be back at home – cup of tea in hand – in a jiffy.
Everything is a touch too manageable in this hard-working but underwhelming production. Stevenson’s hair is puffed up and she wears a blue print dress, pearls dangling about her neck. She snaps good naturedly at her husband Willie (David Beames, brilliantly indifferent), who spends most of his time hidden behind Winnie’s mound. They could be any old squabbling couple at the beach and Beckett’s dialogue, which can be so fierce, starts to sound a bit sitcom-esque.

Stevenson delivers her lines much more slowly than other Winnie’s I have seen. This measured delivery – as sensitive as it is - sucks some of the tumbling darkness out of Beckett’s speech. In Lisa Dwan’s recent and brilliant performance of Beckett’s short plays, including Not I, Beckett’s words were delivered so quickly they felt like a physical force, a battering ram shoved in our faces. Here, Beckett’s words lose their visceral, bruising nature.

Stevenson is a brilliant actress but her great strength is the heat and passion she can generate. She is a wild thumping heart of a performer – but such passions aren’t brilliantly suited to Beckett’s precise writing. At one point Stevenson even breaks down into tears, her voice cracking on the word ‘wonderful!’ I have never seen a Beckett actress cry; it’s just too open and too human for this most enigmatic of playwrights.