'Fuerzabruta' review or 'What happens when this lot come down?!' 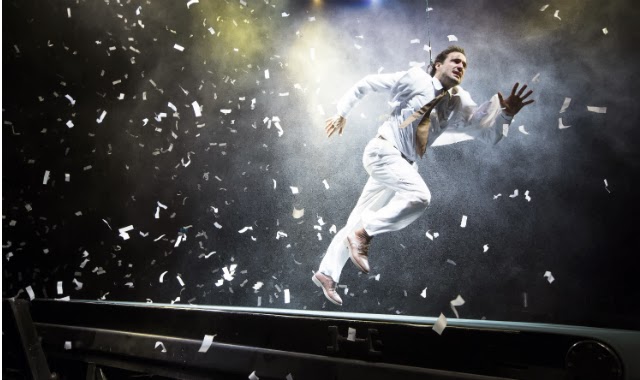 Imagine the craziest friend you’ve ever gone drinking with. Take that friend, multiply the crazy tenfold, and turn that friend into a troupe. Add some audacious aerial work, a suspended swimming pool, thumping beats and a frenetic light show. Now squeeze as many people as health and safety will allow into the cavernous Roundhouse. This, brave friends, is Fuerzabruta.
When Fuerzabruta (conceived by Diqui James) re-opened the Roundhouse in 2006, the show scared the living daylights out of me. I remember pounding live music, glaring lights and my sister being ‘stolen’ by a crazy Argentinian on a trapeze. Last night’s show wasn’t quite as scary but the intensity, the sheer manic joy of this one-off theatrical rave, remains intact.
There’s a slight narrative – something about a suited chap who keeps getting shot – but it only slows the piece down. Fuerzabruta isn’t about anything other than defying the senses and surrendering to their effects. The suited man sprints manically on a treadmill, bursting through walls and sending debris flying. Suddenly, something resembling a huge silver shower curtain enshrouds the space. Girls in floaty dresses, dangling high above us, scream and scamper and dance.

The show only gets bigger and weirder and louder; as if one’s getting increasingly drunk and out of control. A man and woman crawl up and around a huge dangling silver orb, which looks like a supersized satellite dish. As the dish swings around more and more quickly, the audience is swept up by the manic momentum of it all.

The most memorable set piece involves two massive suspended human aquariums. If that sounds bonkers, that’s because it is. The performers swim and splash and spiral in tanks above us, as the water ripples and dances in beautiful, rhythmic patterns. Just as we’ve surrendered ourselves to the unadulterated soggy soppiness of it all, the swimmers slam down on the see-through tank bed, threatening to break right through. Serenity lasts for only a few seconds in this defiantly restless show.
I imagine the free dance section would work better on more rhythmic shores. Last night, there was a tiny mosh pit dancing their hearts out, engulfed by an awful lot of awkward looking Brits. Just as the show’s effect threatens to wear off, the crowd is enveloped in a huge canvas tent. The performers break through the tent and swoop down, picking out spectators for a ride in the rafters. Thrilled and terrified, I whoop excitedly whilst, naturally, hiding behind my friend.