'Blurred Lines' review or 'Spread your legs for the lads!' 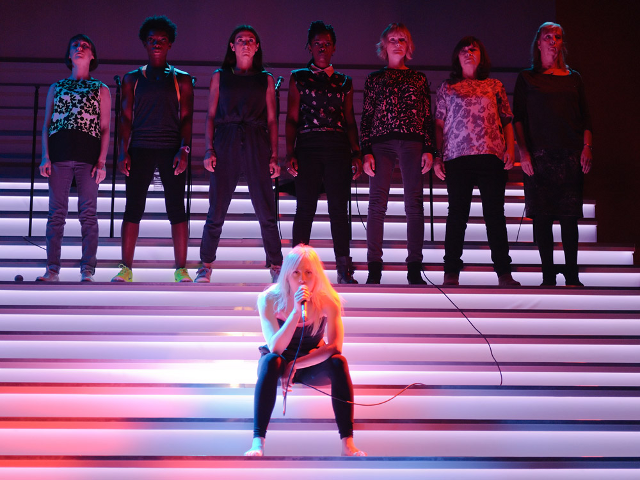 Gionfriddo’s ‘Rapture, Blister, Burn’ – last week’s glossy opening at Hampstead Theatre – was essentially a chaired debate about contemporary feminism. It was a useful play but dry as hell. Nick Payne’s and Carrie Cracknell’s devised show, ‘Blurred Lines’, is like Gionfriddo’s play but with the walls torn down and the volume cranked up. Where ‘Rapture’ plodded, ‘Blurred Lines’ pounces, dancing, stamping and trampling right through the audience and clean through the theatre walls.

The title is pulled from the hit single, ‘Blurred Lines’ by Robin Thicke. The video features topless models sashaying seductively across the screen and was eventually banned at several university campuses. But the fact remains that ‘Blurred Lines’ was the top selling single of last year. Many people you know, supposedly feminists or pro equal rights, will happily sing along with the lyrics.

Where is the distinction between what we supposedly believe in and how we behave? Are women as in control as they claim to be or think they are? At what moments do these lines begin to blur and what can such moments tell us about how far we have to go in the long journey towards instinctive, engrained and consistent equal rights between men and women?

Payne’s play exists in the space between what we hope for and what we fear; in that murky grey area that clogs up the gap between feminism and misogyny, expression and degradation, consensual sex and rape. Bunny Christie’s set situates itself brilliantly within this murky terrain. It isn’t quite reality and it is neither a liberating nor a limiting space. A steep set of steps climbs up and covers the stage space, with just a small stage at the bottom. Brilliant lighting from Lucy Carter makes the space look alternately exciting or threatening, expansive or restrained. The set resembles a tilted catwalk, with all the excitement and mortification such a space could offer.

‘Blurred Lines’ is deeply concerned with the idea of performance and the impact that performance – be that in the realm of fashion, theatre, tv, music, the internet and beyond – has had on the development of the feminism. Bunnie Christie’s set offers a space for this all-female cast to express themselves but it is also a hostile arena; a narrow and precarious performing space, which all-but invites the actress to fall flat on her face, especially when wearing towering high heels.

The play operates consistently at a double level: Payne criticizes the representation of women in the arts and popular culture, just as he gives his characters a chance to air these frustrations. In the first scene, the 8-strong cast suggest roles they have been offered in their careers; ‘Girl next door’, ‘Kooky best friend’, ‘Woman – with character’. These roles are invariably based on appearance and attached to a male counterpart. The actors then whizz through some typical lines these characters might say. They are imploring lines, guiding lines, pleading and questioning. This flurry of reflector lines ends with the humdinger:   ‘Howard, is there a problem with the ship?’

Payne’s play is a picture puzzle rather than a new picture, made up of fragmented lines, snippets of songs, grabbed TV scenes and bruised memories. This isn’t a man enforcing his vision of the world but a sensitive playwright piecing together the thoughts and experiences of many, many women.

Cracknell directs with an exquisitely light touch, always ready to tease open the script and reveal the gulfs and contradictions that lie beneath everything we take for granted. A trio of actresses sing a pop song and writhe about on stage – and just occasionally jerk free and cry out, ‘Help me!’ An actress plays out a TV scene, in which she is attacked by a man and the scene is paused and restarted, only after the woman squeezes herself into some laughably high heels. Another performer storms forward and delivers some fierce poetry – but the words behind those powerful rhythms (poetry from Michaela Coel) are submissive and self-hating, as this brilliant woman strips herself bare in an exhausting, denuding quest for fame.

All the scenes shimmer with this subtle sheen of oily, sweaty hypocrisy. In one horrifically restrained scene, a husband (Susannah Wise) calmly explains to his wife his justification of prostitution. Wise, breathing softly into a closely held microphone, whispers out ‘his’ corrosive compromises: ‘It’s because she trusts me that she submits to me.’ The steam-rolling logic of man and the way in which women can be ensnared in that cruel logic, hovers threateningly over this encounter.

The veneer of control is snapped with cool precision throughout the show. Before the discussion about prostitution, Wise requests to take on the role of the husband; ‘I’ll play David...’ The actors frequently break the spell, ‘choosing’ their roles or nudging the play in the direction they supposedly desire. Payne and Cracknell afford the actresses an illusion of autonomy which we know that they, as ‘servants’ to the show, do not possess.

This idea is clawed right open in a brilliant final scene, which happens ‘outside’ the realm of the play proper. The cast performs one final strangely squawking pop song – a defiantly bad routine – and the lights snap shut. Just as we think the show is over, ‘forty but fuckable’ Claire Skinner introduces a post-show discussion with ‘director’ Martin (Marion Bailey on electrically detestable form) and an actress from the show, played by Gaga-lookalike Sinead Matthews.  It is a brilliantly twisted scene which explores the extent to which theatre is owned and circumscribed by the male director – all engineered by the real but hidden female director, Carrie Cracknell.

It is a sharply written encounter but the most interesting aspect of this final scene is Bailey’s posture. Splayed out on ‘his’ chair, this director is free to expose his body to a world that will not judge him for it. He is free to leave himself open. What a contrast, then, to the actress who sits next to him. As she refers to the director’s vision, Matthews gradually curls up inside herself. With her legs tightly coiled and her eyes cast downwards, just how free is she and whose voice is she really expressing?