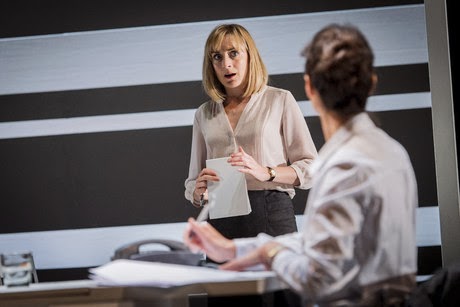 Double lives, double speak and doubling feature prominently in Dawn King’s spy thriller, ‘Ciphers’. Young agent Justine is killed on the job and her sister Kerry is desperate for answers. But is Kerry searching for the right enemy, who is watching whom and how well did Kerry really know her sister?

The premise for ‘Ciphers’ is a clever one and it is easy to understand why Blanche McIntrye – one of this generation’s smartest directors - would have been attracted to this play’s weird and glinty edges. It is a play that seems to hold a lot of secrets and a lot of open space for the director and actors to play around in.

Unfortunately, King’s latest play isn’t nearly as clever as it needs to be. The central device – which sees all the actors play two roles – initially appears useful. In theory, it is the ideal theatrical tool to explore the subject of spying, the deception and doubt such a career creates and how difficult it is, for agents and audience alike, to tell where the role-play ends and the real character begins.

We grapple around in the dark, struggling to grasp a few solid truths, as the characters slide out of our grasp. But this apt and intoxicating confusion does not last long. For one thing, the costumes shift with each role-change. We quickly identify which props go with which roles and the mystery starts to clear.

Another problem with the doubling is that it forces slightly crude performances. Grainne Keenan is impressive as young agent Justine; just blank enough to appear enigmatic without coming across as merely dull or dim. But her performance as Justine’s coke-snorting, gallery owning sister Kerry is much less textured. She is an angry and hard soul but we get few glimpses of the loss and love that might be driving Kerry’s furious investigation.

The actors work a little too hard to create easy distinctions between their roles. Ronny Jhutti is convincing as the wimpy artist Kai, although his relationship with Justine – which is pivotal to the plot – is really just a sketch of a connection. Jhutti’s performance as informant Kareem is all tics and flat one-liners. It doesn’t help that his whole story feels like little more than plot device.

This play is trying to grapple with the elusiveness of the human soul and fold the themes of spying, suspicion and secrets on top of our own lives. But the characters are too easy to read. The problem with a spy play, too, is that so much of the dialogue feels over-familiar; ‘Karim is like a small dog. Does he need a treat or a beating?’ Justine’s boss, Sunita (Shereen Martin) sounds like she’s reading from a TV script, which adds all her scenes an air of thin falsity, rather than textured ambiguity.

McIntyre keeps things moving along at a tidy pace and uses a range of grey speckled screens, which traverse across the stage and allow the characters to mysteriously vanish and materialise at will. In fact, the piece is so slick and assured, that it feels much smarter than it really is. But there is little McIntrye can do to disguise the false notes that start to ring out loudly in King’s neat but brittle script.  The characters are too hollow and the plot too fanciful and, by the end, this promising play is more soap opera than spy mystery.