'The Body of an American' review or 'We need a bigger frame!'

'The Body of an American', Dan O’Brien
The Gate Theatre, Wednesday 29th January 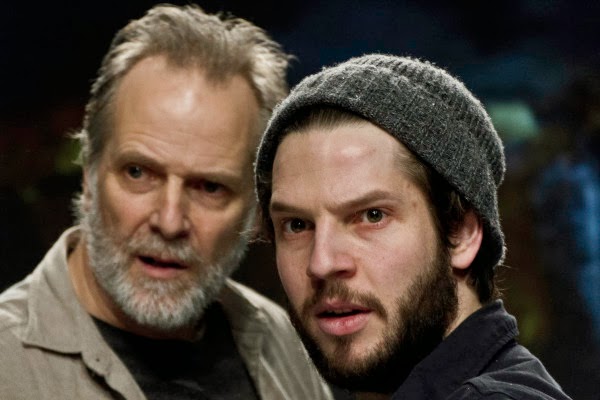 Lofty questions indeed! But fear not; ‘The Body of an American’ might be a hard-working play but it is not hard work to watch. Dan O’Brien has structured his play so intelligently – and James Dacre directs with such deft precision – that the questions seep out of the framework, as the play unfolds.

The premise is a deceptively simple one, which is gradually thickened and twisted. Playwright Dan O’Brien, also a poet and teacher, has decided to write a play about war journalist and photographer Paul Watson. In 1933, Watson took a photo of an abused American soldier in Mogadishu, which would go on to earn him a Pulitzer prize and a lifetime of guilt. In particular, Watson is haunted by a final phrase which he swears passed from the dying soldier’s lips; ‘If you do this, I will own you.’ ‘The Body of an American’ plots O’Brien’s quest to get to the bottom of this story and Watson’s soul.

The play splices together emails, conversations and real-life encounters – including a trip to the Canadian High Arctic – between O’Brien and Watson. It also includes a stream of photos from Watson’s career, which are projected on opposing walls of the stage space. Alex Lowde’s design encloses the audience in a small metal hut, a bit like a war bunker. The narrow stage space runs between us, with the audience seated on opposite sides. In every respect – in terms of the words, photos and shared performance space – we are folded into the ‘reality’ of the play.

Such a tight dramatic and physical structure, in which the audience is so completely involved, allows O’Brien and Dacre to ask a lot of difficult questions without pushing too hard. Watson (William Gaminara, whose hard eyes act like a barrier to his soul) and playwright Dan (Damien Molony, in a likeable but equally enigmatic performance) spend most of the time on opposite sides of the performing space. As our eyes travel between them, we are forced to decide who to trust; whose face we will focus on and whose voice will lead us. The subjectivity of truth begins to hover in the air.

The slipperiness of truth – and the impossibility of recording it – is further pulled out by O’Brien’s use of ‘real’ (the eternal need for quotation marks when discussing this self-referential play!) photographs and recordings. As Watson recalls a lifetime of journalistic missions to war-torn countries, his subsequent photos flash up on both ends of the bunker. We are nudged into making a decision: do we focus on the photos or on Watson and O’Brien, talking in real-time? Which truth will we choose to follow? As the pictures grow more vivid and disturbing, it becomes harder and harder to tune into the ‘real’ voices that speak to us from the centre of the stage. The photos are so compelling that we begin to neglect the real people in front of us. How much do war photos help us access the truth and how much do they distract us from the real truths unfolding centre stage?

Deeply considered directorial touches help tease out the conflict between dynamic reality and frozen artistic representation. The two actors click their fingers to bring up relevant photos. As the play progresses, these clicks – redolent of the click of a camera – intensify. It is as if these two characters are trying to control the play, to shape it into the story they wish us to see rather than the ‘true’ version of events. This idea ricochets around at quite a racket, when we consider that these actors are playing real-life characters, who in turn are now absent from this final portrayal. Just who has the final say when it comes to the artistic representation of real-life?

Dacre further explores the way that art distorts reality by creating pixellated frames around the projected photos. The edges of the photos are blurred, reminding us of the messy reality that lies, uncaptured, beyond the chosen frame. In one extraordinary sequence, Watson recalls capturing an image of a crying girl in Rwanda, traipsing through a bunker packed with corpses. He reflects: ‘I take a step back, to frame her with more corpses’. What a cruelty there is in the tidy and precise representation of human devastation – but what necessity, too.

The isolation of the artist – the step back he must take if he is to usefully reflect the world around him – is reflected powerfully in the images pulled from Watson’s and O’Brien’s surroundings. The photos from O’Brien’s life are almost always vast empty landscapes or sparse and lonely interiors. Whilst Watson’s pictures are packed with people, they are people that he must remain removed from, if he is to do his job.

It is no coincidence that when O’Brien and Watson finally meet it is at the Canadian High Arctic, where the ice-caps are melting and the world is sliding away. Here, on the edge of earth, O’Brien finally makes contact with Watson. In a final cruel but honest twist, O’Brien does not have the epiphany he was hoping for. In fact, the weather is so vile and Watson’s emotional barriers so high, that O’Brien spends most of his time watching TV. It is that ultimate irony that keeps the artist constantly searching, hungry and disappointed; for all that hunting there will always be something unreachable about mankind, which lies just outside the picture.