'The Day Shall Declare It' or 'Waltzing, washing lines and an empty bath.'

The Day Shall Declare It, Wilderness
Marylebone Gardens, Friday 10th January 2014
Written for Time Out 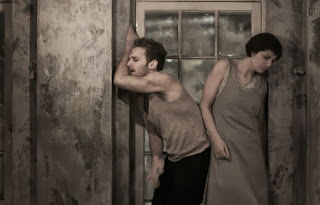 A man scales the walls of his crummy apartment and a gentleman waltzes with an empty suit-jacket; striking images from this dance led-promenade piece, staged in a disused BBC building, which explores the suffocating squeeze of working-life during the Great Depression.
The show was devised by LA-based company Wilderness and draws on a cluster of Tennessee Williams short plays. All the scenes involve cramped couples, hemmed in by their homes, husbands, jobs and desires. Combining regimented dance sequences, a claustrophobic set and Williams’s piercing dialogue, director Annie Saunders traps her characters in self-made prisons.
Beata Csikmak’s set design is creepy, symbolic and brilliant. The first scene unfolds in a boarded-up room, crammed with washing lines. There is barely space to breath. A frustrated ‘star-gazer’ husband (Chris Polick) and his wife (Annie Saunders) brush up against each other, as their passion turns to anger to despair.
Choreographer Sophie Bortolussi uses jolting movements to accentuate the couples’ frustrations. The dancing occasionally feels forced but is often excellent. Two gentlemen meet in an opulent study, crammed with ticking clocks. As they struggle with their attraction and alcoholism, their arms move independently, reaching out for their unconscious desires.
A final scene takes place in a huge bathroom, dripping in blue. A wistful couple converse, as a man (Anthony Nikolchev) slides about in an empty bath, possibly drowning. It is a difficult scene but it pulses with the desire for a new and better life. Demanding, intelligent and memorable theatre.