'Not I, Footfalls, Rockaby' review or 'More, Ma, Mare' 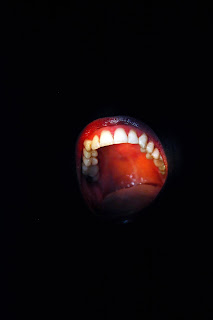 Beckett is viewed with such hushed reverence but he is really a sensual poet rather than an intellectual playwright. This rare trilogy of Beckett plays at the Royal Court, which includes his late short plays Not I, Footfalls and Rockaby, is a visceral, deeply sensual experience. It plays tricks on the eyes first, the mind second.
Lisa Dwan tackles all three roles; a brave move bordering on bonkers. Every night in this run must take a year off Dwan’s life. It’s worth it, though, for this is surely the performance of Dwan’s career.
Dwan excels in Not I, the most famous play of the trilogy. Using black tar (spread over the actor’s face and neck), black costumes and an absolute black out, the effect is created of a mouth suspended in mid-air. This mouth than rattles through a lifetime of memories and anxieties, with Dwan doing all she can to match the speed of human thought. It is like watching one of those ticker tape streams read out loud, on fast forward.

There is only so much one can take in when the text is tackled at some a ferocious speed. One begins to focus on the catches in speech; the vowels that slow things down or the howling cackles, which open out the mouth. As the monologue whizzes past us, we stop looking for meaning behind the words or beyond the mouth.

The brain floats off and the senses take over. The dark, which engulfs the mouth and audience, develops a presence of its own. It grabs at all of us. The mouth seems to grow bigger and, in a downright spooky moment, it seems to move back and forth across the stage, all of its own accord.
This blackness that enshrouds Not I lingers about Footfalls. A woman, dressed in a floaty white nightgown, paces up and down across a strip of light. It feels like she occupies a half space between life and death. This feeling is accentuated by the voice of a ghostly mother, hovering in the rafters.
Director Walter Asmus’ version of Footfalls is a bit too spooky for its own good; the nightgown too floaty, the absent voice too crusty. But some brilliant lighting from James Francombe elevates this show. Dwan’s body starts to fade away. As the light cuts away Dwan’s body, only her head remains a solid presence. It is as if, in a state of rebellion or resistance, she is crawling out of her skin.
Again, it is the lighting in Rockaby, which proves the most expressive element. A woman sits in a rocking chair, which seems to rock without any prompt. An off-stage voice details this woman’s gradual removal from life. The lighting (what prominence Beckett gives to light and shade!) claws at  Dwan’s face, until it feels like she has one foot in the grave – and one foot in the theatre. Deadly.