'what happens to the hope at the end of the evening' or 'Watching me watching you!'

‘what happens to the hope at the end of the evening ‘, Tim Crouch and Andy Smith
Almeida Festival, Thursday 11th July 2013 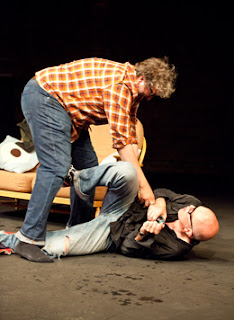 I loathed Tim Crouch’s Royal Court show, ‘The Author’, back in 2009. I felt manipulated by someone much stronger and wiser than me. I felt abused and I felt very angry.
‘The Author’ planted a number of actors in the audience and asked us, without the aid or relief of a stage (and action one-step removed), to imagine terrible horrors. It was the most gruelling night I’ve ever experienced at the theatre.

Today, I look back on the white rage that ‘The Author’ sparked in me with fondness. I now believe the anger I felt was a mixture of confusion and shame and sorrow. Anger isn’t really anger – it’s just a mix of different emotions we haven’t yet learnt to recognise.

The shame I felt was also accompanied by a new understanding about theatre; a recognition of the responsibility that we, the audience, share for what happens on-stage, as well as all that we see and allow in our own lives off-stage.

The responsibility which theatre invokes – and the collusive relationship between the audience and the actor – is interrogated brilliantly in Crouch’s latest show; a two hander with Andy Smith, entitled ‘what happens to hope at the end of the evening.’ Ostensibly this is a very funny, emotional and unusual show about two old friends meeting up after a long time apart. But around this basic framework hover ideas about fractured intimacy, fading connections and ruptured responsibilities.

There’s a lack of palpable effort to the performances, the script and direction. Karl Jones is an exceptionally patient director. He gently nudges away at us all night, allowing us to connect with the show on our own terms and at our own pace.

A great deal of this piece is pure entertainment and involves a number of inspired rants from Tim Crouch about baby on board stickers, policemen, new age bollocks and engrained pretensions. Sometimes, Crouch’s rants go so far that he runs out of scream and peters off into a girlie squeal. It’s properly daft and not hugely taxing.

It is the gaps in between the main action that get one thinking; the staging, the structuring and the silences. The physical space separating the actors is fascinating. Crouch is all movement, expression and noise. He is in-role – as much as one can be when playing a version of oneself – and off-script, working within a set and existing only on-stage. He creates dynamism and dramatic texture; a sense of self-contained performance, which sets apart the stage and the audience.

Andy Smith, who plays Crouch’s friend, acts as a bridge between the audience and the stage. He sits on a chair, apart from the set, and reads from a script. Much of the time, Smith reports quotes and theories directly to the audience. At certain moments, when a wedge has been driven between the two friends, Smith narrates actions directly to us; ‘I tell him he can sit on a step outside’ or ‘I tell him to take his coat off.’

We slide between sides – team Crouch and team Smith – governed by forces beyond our control. The way these two act, involving or distancing us, changes our function as an audience. It is not something that we control and, yet, for some reason, we occasionally feel guilty.

This distance between the two friends on stage dances mischievously about the entire production. It is there in the different space and temperament these two occupy – and it is also there in the huge silences that punctuate the script. These silences are filled with anger or regret or lost time these two will never share. (‘I wait for my friend. My friend is late.’) Again, these silences are something that we – the audience – feel part of.

With every silence, Smith looks – neutrally – out into audience. An odd feeling of responsibility creeps amongst us. Are we the time and life and distractions that came between these two intimate friends? Or are we the very force that brought these two together? A great swell of contradictions rises up, playing with us, jostling us and involving us.

Theatre itself begins to materialise as an important presence in both the performers’ lives and our own. The idea of life as isolation, as computer screens and wired connections, starts to shade the script. The opportunities for real human contact are dwindling. Theatre is one of the few mediums that will continue to bring people together in a real space, in real time. We all have a responsibility to keep creating and sharing this space together – no matter how conflicted a space it might be.