'Watch iT' review or 'I think we should go on a break.' 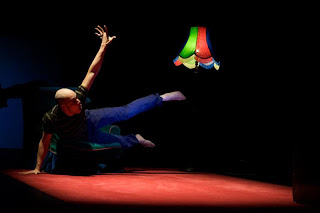 As Tony Mills glides, bounces and scampers about the Almeida stage, sweat slides off him. At one point, I thought it might be raining. Mills pours his whole body into ‘Watch iT’, which explores the destructive relationship between a man and his television. It’s a strong concept executed with absolute commitment – but the ideas eventually dry up.

We open on a man sunken into an armchair, TV projections dancing across his face. Mills dances through a merry-go-round of emotions, all contained in that flashing TV; fear, anger, joy, passion and violence are all invoked with jittery movements, somewhere between robotic and puppet-like. Man is hostage to TV and this deeply involved relationship is isolating us not just from each other but from our own bodies.

But then things open out and, as Mills tries to expand his ideas, his show becomes less expressive. Clever graphics are screened on a giant model TV, with which Mills interacts. These graphics – which take us ‘inside’ the TV – look great but say little. Mills spends a lot of time mirroring the action of another Mills, stuck inside the TV. It’s fun to see the real and surreal Mills interact together but it’s ultimately just a trick.

Mills also starts to speak with the TV, which reduces the early, obscure power of this piece. An already explicit show begins to feel over-exposed. The more the relationship between Mills and TV is unpicked, the less profound it feels. The concept and performance start to work against each other. This is particularly apparent when Mills rolls across the floor, a TV clutched to his chest; Mills’ idea impinges on his dancing and the dancing does little to develop the main idea.

But Mills is certainly an inquisitive and unusual performer and, when he gets it right (mainly when he expresses his ideas via elliptical dancing) the show holds a weird, misty power. There’s a very odd moment when a jaunty Mills stalks about the stage, a TV attached to his head. It’s an arresting image, suggesting the man-monster that TV is making of us all.