'The American Plan' or 'The Master Manipulator' 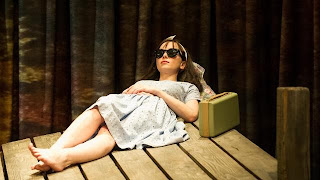 We don’t see nearly enough of Diana Quick. She is so good in this transfer of Richard Greenberg’s play, ‘The American Plan’, that the audience practically salivates every time she’s on-stage. Emily Taaffe is equally impressive and her performance ripples with complexity. The acting here is quite something – but the play still leaves one feeling cold.

Written in 1990, this is one of Greenberg’s earlier works and it feels strained. The setting is the Catskills holiday resort in 1959. The action unfolds across the lake from the main resort, where German-Jew refugee Eva (Quick) and her daughter Lili (Taaffe) have spent the last few years holidaying in sad solitude.

Into this scene splashes cheerful American, Nick (Luke Allen-Gale), who soon falls for the sparky but secretive Lili. Their romance is played out against Jonathan Fensom’s faintly surreal backdrop. A wooden jettee slopes down into a pool of watery tiles and a curtain – painted in abstract greenery – cloaks the back wall. Sparse props look on the verge of drowning.

Nick and Lilli’s romance crackles with intensity, swinging between open joy and fearful distrust. Taafe’s performance is brilliantly impulsive: she floats with teenage infatuation one moment and then sinks, broodily, into a deep and unknowable despair.

Diana Quick is formidable as Lilli’s mother, Eva – ‘the one they call the Duchess’. With her thick German accent, it’s as if she’s bending the English language to her will. Every conversation follows Quick’s own deliberate pace and even the silences seem to cower in her wake.

Director Richard Greenberg keeps things cantering along at a suitably bewildering pace. With each new scene comes a new set of a lies, a new scheme from master manipulator Eva and a burgeoning sense of unease. The carpet is pulled furiously beneath our feet and we slide about, unsure who to trust.

But the games begin to wear thin. The characters are twisted this way and that, until they’re almost lost altogether. Greenberg shows us every side of his characters – but he fails to show the soul that lingers underneath.