'Talk Show' review or 'I think we need to talk.' 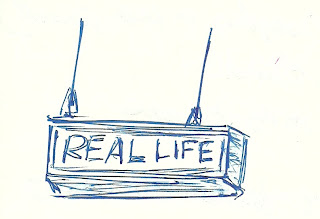 A wolfman uncle, a world ablaze, a live snake and a kid who wants to be David Letterman. Alistair McDowall’s plays hover on the edge of reality; unique, unpredictable and able to accommodate just about anything. McDowall’s writing also balances brilliantly between scorching rage and crumbling tenderness. He is the only writer who always makes me cry.

‘Talk Show’ is part of the Royal Court rep season and feels a touch more strained than McDowall’s previous play, ‘Brilliant Adventures’. The off-beat world and wild emotions which McDowall generates need plenty of space to breathe or they risk seeming a bit ‘much’. Still, it doesn’t really matter: this remains a compelling, neon-coloured explosion of a play.

The entire piece, directed with exuberant sensitivity by Caroline Steinbeis, takes place in young Sam’s bedroom. It is here that Sam hides from the world outside – somewhere in the North East of England – and makes his internet talk show. Chloe Lamford’s set is filled with a youthful yearning for a brighter and more glamorous world. A cardboard cut out of New York – a lifetime away – sits behind Sam’s desk, colour is draped everywhere and disco lights flare hopefully.

The play kicks off with Sam (Ryan Sampson) interviewing a chicken shop man for his talk show, watched by roughly 8 people. Flashes of the outside world flare up – hot and frightening – throughout Sam’s interview; ‘His eye just – pops in his fucking skull!’

Sam isn’t just cut off from the world outside – he is also isolated in his own home and mostly listens to his father (Ferdy Roberts) via a baby monitor in his room. This safe isolation is broken when Sam’s uncle, Jonah (Jonjo O’Neill), crawls through the bedroom window. He is caked in mud and ripped up. Jonah is back after a long absence. He doesn’t look like he’s had a good time.

As Sam and Jonah get closer, the world beyond Sam’s window begins to leak into his bedroom. Jonah and Sam’s dad fight and glass each other. Sam invites a snake handler onto his show and a live snake, which looks like it could strangle us all in our sleep, is brought on-stage. Jonah gets angry and smashes things. Sam’s world gets more violent – but also more real.

When Sam touches upon the reason for Jonah’s disappearance – connected to Jonah’s daughter – the emotions and violence explode. Jonah goes on a rampage and releases ‘all kinds of flame and fury’. McDowall pulls the noose tight, drawing anger and love closer together.

There is a brilliant speech from Jonjo O’Neill as Jonah, in which he describes walking to the ends of the earth in the hope of escaping both language and pain. He shakes with sadness.  Sometimes, the pain that love brings is too wild and complex to express – but we still have to try. I only hope that McDowall – with his extraordinary sense for the ugliness and beauty of the human heart – keeps trying for a very long time.