'Julius Caesar' review or 'A bloodbath in the courtyard' 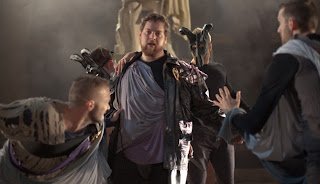 Blimey, there’s a lot of blood here. Brutus stabs Julius Caesar so many times it’s a wonder there’s any skin left. Everyone walks around with gore-spattered riot shields and red streaked faces. By the end of Iris Theatre’s promenade production, the steps of St Paul’s Church are stained crimson.

The battles in director Daniel Winder’s chest-thumping version of ‘Julius Caesar’ are very good. It’s the war of words I’m not sure about. The action jumps from the church steps to the rose garden and the show doesn’t settle. We never reach that eureka moment when Shakespeare’s language becomes our own.


Joanna Beart-Albrecht’s eclectic costumes confuse things further. The context is ‘vaguely modern’ at best. Julius Caesar (a peacock-chested Matthew Mellalieu) and his followers are dressed in skinny black jeans and the occasional toga. Brutus (David Hywel Baynes) accessorises with a threadbare shawl and the Soothsayer scampers about in a gas mask and garland of fairylights. There’s a visual impact but they don’t make sense.

The same can be said of Winder’s direction, which is brilliantly committed but not always helpful. There’s a lot of dry ice, white hot lighting and roaring bass music but not much consistency.

The best scene is a modest one, which allows the audience into the action. It is the night before battle and Brutus is afraid. The audience huddles together under a simple canopy, Brutus weeps and Caesar’s ghost walks amongst us all. 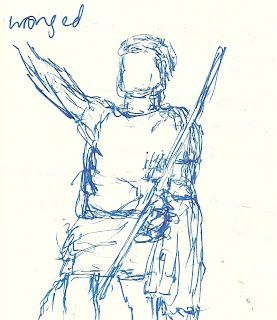