'Little on the inside' review or 'Red raw screams in the silence.' 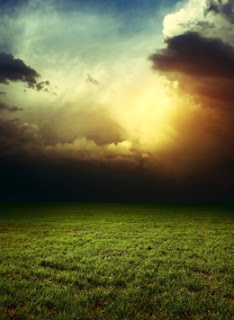 Next time I go to a Clean Break show, I’m not sitting on the front row. Watching this exposed heart-beat of a play, which explores the relationship between two female prisoners, is like having a blow-torch blasted directly into your face. It really hurts.

Alice Birch’s red raw piece, ‘Little in the inside’, is an immediate and muscular piece of writing. This feeling of immediacy is enhanced by the scenery or lack thereof: the production unfolds in the Almeida foyer, with only a blown up photo for a backdrop. The photo depicts a sea of a field; a dreamy and endless green expanse, with sunlight creeping around the clouds overhead. It is such a crystal clear image that, despite its otherworldly nature, I thought there might be real grass poking out along the bottom.

In fact, everything about this show feels like it has been trimmed with real-life; the words (inspired by real life experiences of female prisoners), the performances and even that huge, patently fake photograph.  Birch’s play barely feels like a play at all. It is too honest, stuttering and open. The emotions are so accurate and palpable, they practically have colour, form and weight.

Such authenticity is largely down to two brilliantly unaffected performances. Susan Wokoma plays the ‘quiet one’ – a prisoner who stays silent so that she still has something left to lose. The power that Wokoma commands in those silences is quite extraordinary. Simone James, the ‘bolshy’ prisoner, is a coiled spring of rage and frustration; strutting, swearing and spitting and leaving little bits of herself, and her pain, wherever she strides.

The script is as tender as it is intense. Great fire walls of despair (‘Her head like a red raw scream!) are extinguished by gentle smiles or tentative giggles. Wokoma – prisoner A - tiptoes quietly around her past and the reason for her imprisonment. James – prisoner B – stalks boldly, jumping right over the abyss but refusing to look down.

The play isn’t perfectly structured but the minutely observed characters easily negotiate any slight jolts in the structure. Lucy Morrison directs with a hard-earned understanding of the emotional dynamics involved. She allows the ugly moments to flare up just as strongly as the beautiful bits. The result is a show of revelatory force, which pulses with the energy of a hundred stories and prisoners set free – if just for a moment.