'Hush' review or 'If a show falls over but no one hears it, does it still make a sound?' 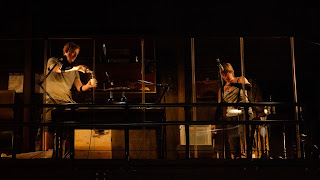 If you want to see what Matthew Herbert can do with sound then look up his electronic music on YouTube. Herbert uses trains, chickens, diners and an endless spectrum of everyday sounds to create insistent and involving music. His music jostles and teases and invites you to slide alongside it. ‘Hush’, on the other hand, is a piece of devised theatre so oblique and removed, that it never really feels like it has begun.

Everything about ‘Hush’ – plot, character, atmosphere, the whole blooming reason d’être of this piece – is kept stubbornly obscure. Ben Power, who helped Herbert create this show, could have done more to create some sort of a lifeline between the show and spectators. Instead, somewhat indulgent ambiguity is sustained at the cost of the audience’s involvement.

The piece is set some time in the future. I think. This is a time when a new therapeutic technique has been discovered; the Hush session. The Hush technique uses sound effects to recreate salient moments in people’s lives. Susannah Wise plays a lady who has chosen to undergo the Hush experience in order to get closer to her (dead?) father. Tobias Menzies’s character is the chap in charge of Hush and is struggling to cope with the (presumably) recent loss of his (possible) wife.

This is the only concrete information we are given – the rest is guess work. All that guessing seriously compromises the show. I’ve no doubt this unusual piece was meant to be an immersive and reflective experience – but that’s just not possible when the audience spends most of the time wondering what on earth is going on.

The production flits between self-conscious and self-contained. When Wise undergoes the Hush experience, the action is complete and distinct from the audience. But, at other times, the fourth wall is broken and we are encouraged to consider the mechanics of the show. The foley artists are always visible and Menzies occasionally speaks directly to us, alerting us to hidden microphones or obscure sounds. This show spends an awful lot of time stopping, turning and looking back at itself; the theatrical equivalent of a prolonged navel-gazing session.

Some interesting ideas are never properly pinned down. The incredible specificity of sound – and its ability to wheedle out a lie – is crystallised in one fascinating moment, when Menzies asks the foley artist not to simply tap on his keyboard but to ‘type real words’. Sound cannot lie. The truthful quality of sound is also reflected in the secretly recorded segments, which are played back to us. For some reason, sound created without an awareness of a listener, feels like honest sound. If only such precision and honesty had been funnelled into this frustrating, posturing show.