'Our Town' review or 'Why oh why haven't I seen more Wilder?' 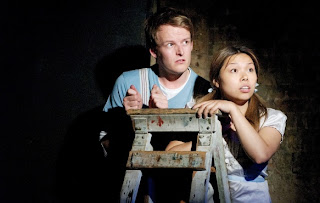 Since picking up a Pulitzer Prize in 1938, ‘Our Town’ has played every night in a theatre somewhere in the States. Lucky bastards. In London, few people have even heard of Thornton Wilder’s classic homage to the American way of life. More fool us. This is a one-of-a-kind theatrical gem. Miss it at your peril.
Set in a fictional smallsville in New Hampshire, ‘Our Town’ looks at normal folks living everyday lives at the turn of the twentieth century. We see a young couple fall in love, marry and die. We watch weddings and funerals, humdrum suppers and walks in the moonlight.
It sounds bland – but the ordinary becomes extraordinary under Wilder’s gentle guidance. The writer stipulated no set and minimal props and director Tim Sullivan has wisely complied. Actions are mimed, so basic chores, such as stoking the fire or preparing dinner, become a beautiful dance.
There’s also a stage manager on hand (played with twinkling charm by Simon Dobson), who guides us through with graceful prose and gentle wisdom. He also rattles away at the fourth wall, nudging characters off-stage and flashing scenes forward. A jolly exchange is frozen and we’re quietly informed this young chap will die in a war. A warm embrace is usurped by a funeral; a happy wedding undercut with despair.
The acting, alas, is a little patchy. But this diverse cast, with a huge range of ages and accents, keeps us on our toes. We are never allowed to settle into the action happening on stage – to take the theatre or life for granted. A humbling show, which makes one look at the world anew: ‘Now you know. That’s what it was to be alive.’