'Untitled Matriarch Play (or seven sisters)' review or 'It's all Me Me Me Me Me!' 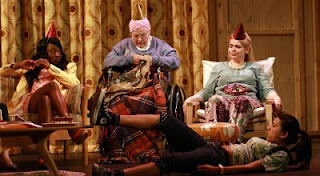 Bugger. I really wanted to love this. ‘Untitled matriarch play (or seven sisters)’ is part of the Weekly Rep at The Royal Court, in which the same ensemble performs six new plays, over six weeks. The Weekly Rep is just one component of Vicky Featherstone’s inaugural season at The Royal Court. This ‘Open Court’ season is also hosting – deep breaths – surprise theatre, big idea nights, comedy events, one-on-one readings with playwrights and shedloads more.

The energy coming off The Royal Court Theatre right now is something else. The venue is sparkling, smiling – opening out its arms and hugging the whole damn lot of us! The space feels different; louder, brighter and much more open. It feels like a space which might foster creativity – rather than simply staging creative works.

These are all very good signs. But this play, alas, is a stinker. I haven’t seen such a shrill production in quite some time. The script is so brittle, one’s scared to breathe, lest it shatter into a million pieces.

There’s not much to the plot, which is stretched out for far too long. A mother (Siobhan Redmond) gathers her four daughters on the eve of her 55th for a shock announcement: she is going to have a surrogate son! Cue much outrage, confusion and heavily laboured (ha!) soul searching.

The characters are thin as hell and essentially just mouthpieces for some mediocre jokes. Laura Elphinstone is such an unusual actress, who always pulls me in, but she’s reduced to a punch-line in this play; the depressed middle child who is always ignored. It generates a few gags at the start but soon gets wearing. Sometimes the jokes are extracted merely from the characters’ names; ‘I was called Mimi because I’m all me me me.’ Just painful.

The actors don’t seem convinced by the comedy and there’s a faintly apologetic air to the whole night. It feels like we’re watching a soon-to-be-cancelled sitcom; even the audience’s laughter sound canned. A few meta-theatrical elements are introduced later on, such as a bored man heckling from the audience. These touches are wildly misjudged. They feel like a mistake and utterly out of place; the type of nuanced and thoughtful touch that belongs to an entirely different kind of play.

Vicky Feathersone hasn’t committed herself to this production, which was only ever going to work if it was painfully over-stated. This is the kind of over-explicit piece that only speaks if it roars. But Featherstone and her actors seem to be straddling the divide, hitting the banter hard at some moments but going for soft intimacy in others. The two tones just don’t get along.

Thank God for Anna Calder-Marshall, who radiates something much deeper and stronger than the play itself. Calder-Marshall speaks rarely (she plays an ageing grandma) but she makes her words count. Her monologue is ferocious and moving. She breathes fire over the lot of us: cherish your life, whilst you still can! Too bloody right. Now - how the hell do I find my way out of this theatre?