'The Drowned Man: A Hollywood Fable' review or 'I think I'm losing the plot.' 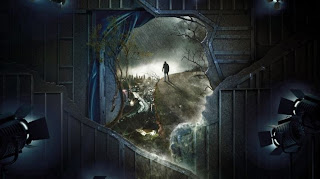 Punchdrunk's latest promenade extravaganza, 'The Drowned Man', feels like getting wasted on exquisite cocktails. There are moments when the spirits, surroundings and atmosphere combine brilliantly and everything feels exhilarating and magical. But there are also times when the dizziness kicks in, weariness floods through the body and you just want to sit down and cry.

The source text here is Buchner's 'Woyzeck' - an immeasurably better choice than Punchdrunk's last show, 'Sleep No More', which drew on Shakespeare's 'Macbeth'. Woyzeck is a fragmentary play, so narrative – never a strong point with Punchdrunk – isn’t the priority. Instead, Buchner’s play is all about atmosphere, anxiety, confusion and a gradual overturning of the senses. These are emotions that Punchdrunk excels in with their disorientating shows, more ghost-ride than theatre.

The canvas for 'Drowned Man' is the biggest yet; a gigantic abandoned sorting office in Paddington, which they have re-imagined as a once thriving move studio, mysteriously shut down in the 1960's. It's a gaping black hole of a space, which sprawls over four floors; a building that tingles with secrets and a deep sense of loss.

The expansive but minutely designed set (Felix Barratt, Livi Vaughan and Beatrice Minns) is so brilliant that there were moments I giggled in astonishment. The space has been roughly divided into two different worlds; that inside and outside the film studio. Outside is packed with ramshackle caravans, spooky forests, flowing fountains, cafes, bars, stores and even a fully functioning cinema. As I said, audaciously sophisticated stuff.

Inside the studio is a world of crumbling glory; weirdly tinted office spaces, dance floors, dressing rooms and countless expansive sets, which feel ghostly in their state of frozen action.  There are also some sinister outdoor spaces, which exist neither outside nor inside the studio but somewhere in between reality and dreams, life and death.

This is a world that has the potential to send anyone insane – not least the audience (all in masks), desperately trying to keep up with the action. There are not one but two plot threads. Punchdrunk has taken the main plot of Woyzeck and doubled it, executing mirrored stories both inside and outside the movie studio. It is an awful lot to keep up with and a genuine burden. There's an anxiety that lingers throughout, which stops the show from being truly immersive: am I missing the best bits?

If Punchdrunk had just scaled back a little – perhaps kept the same physical scope but stuck to one plot thread – this anxiety might've dissipated and I could’ve lost the plot in the right way. There is a disorientation that comes from a desperate attempt to keep up with things – and then there is a deeper and keener edginess that comes from one's hold on reality being quietly wrenched away.

I chose to stick, mainly, with just one plot thread – that of Mary (Kate Jackson) and her strung out boyfriend, William (Paul Zivkovich), a manual worker who lives near the studio. This narrowing choice allowed me to focus but it also gave me much more freedom. I lost myself in these characters stories and let the venue take a hold on me. With less to follow, one's brain is free to roam. Following William and Mary and their fraught relationship, I was distracted by a woodland, full of smoke and mystery. A strange performance, in which a hulking chap gracefully danced about the branches, transported me somewhere surreal and unsettling. I lost my bearings and I began to understand and channel William’s loosening grip on reality.

No doubt those who stuck more closely with the actors inside the studio experienced similar sympathies. This studio setting – a world in which characters make a living out of imitating others – is a clever backdrop for Buchner's play. It is a context which has the potential to tap into the fractured souls, which haunt Buchner's play. But an awareness of the presence of this studio sub-plot – and all that I was missing – kept me hovering above the action, worrying about what I might have missed rather than appreciating what I had gained.

Deep into the show, I stumbled across a scene for a second time. Zivkovich and Jackson were performing a typically impassioned dance – silent (as is most of this production) but jaunty and frantic. First time round, I became lost in their angry dance. Second time round, I felt tired and lost and thoroughly fed up.

But then an actress grabbed me by the hand and dragged me to a final scene; a visceral, angry outburst that felt like an exquisite release. I stood tucked beneath some scaffolding, this actress so close I could hear her breathing. It felt like being injected with pure drama. Punchdrunk shows might be frustrating and even wasteful sometimes – but they sure do get under your skin.