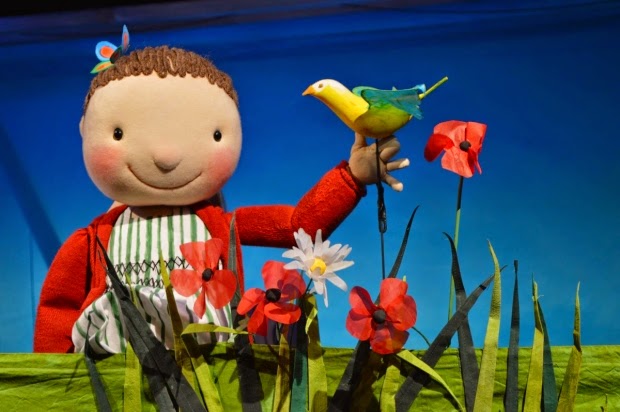 Young Rosie likes to dream. She dreams at night and during the day and in all her dreams, her toys come to life. In Rosie's head, her tiger slippers growl and prowl, her brother's dinosaur is something to be feared and you should see what Rosie can create with just some paper and scissors! The Paper Dolls is a magical version of the best arts and crafts session you can imagine – and it's a total delight.
Like Toy Story and The Velveteen Rabbit, The Paper Dolls – which is based on the book by Julia The Gruffalo Donaldson - turns children's play into a reality. There is a dreamy quality to Lyndie Wright's set. Glowing houses, sparkling stars and twinkling wind chimes dangle from the ceiling. The stage itself begins as a fairly modest canopy but throughout Peter Glanville's gently entrancing production this space transforms into a sun-soaked desert island, a garden in full bloom and a twinkling ocean teaming with crocodiles.
Young Rosie is inspired by Rosie Cobb's original illustrations and brought to life by actor Jane Crawshaw and Lyndie's Wright's puppet. In a neat little twist, Rosie looks like a girl's doll brought to life; all chubby cheeks, soft limbs and a great beaming smile. We also meet Rosie's (very) patient mother (Andrea Sadler) and her pesky brother Tommy, who spends the whole show bouncing about in a sack and looking for trouble.
Gradually, Rosie's imagination takes a stronger grip on the world around her. Initially, Rosie's paper dolls (which picture five little friends holding hands) merely have to fend off Tommy's toy dinosaur. But it isn't long before Rosie's paper-pals are fighting off farm animals, tigers and crocodiles. The farm animals are represented by great wooden blocks, the tiger is conjured up using a printed rug and separate, swishing tail and the crocodile roams threateningly in rippling blue waters.
There are a few winks to the adults ("Take that pig out of that blanket!" and some shared groans between Rosie's mum and the parents watching. But there is more than enough stage-magic here to pull us all in. In one spell-binding scene, Rosie spots a plate with a beach-image, and with just a swooping sheet here and a swaying palm tree there, we're transported to paradise. The final garden-scene is created using an exquisitely designed nature-stuffed canvas (complete with ladybirds) and transports us to the lazy, endless days of childhood summers. We sit, captivated by one girl's imagination – and deeply reluctant for the spell to be broken.
The Paper Dolls runs at the Little Angel Theatre until 28 June