'Pioneer' review or 'What shape do these stars make?' 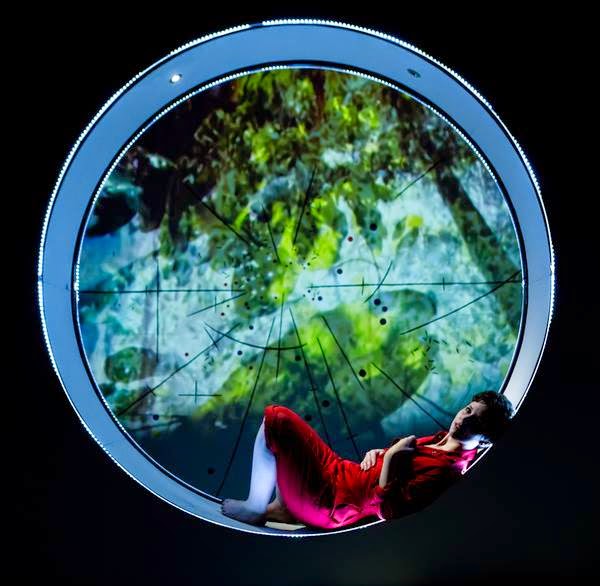 It’s 2029 and Mars One has failed. Imke is stranded in outer space, with just her boyfriend Oskar and a smooth-talking Artificial Intelligence bod for company. Meanwhile, Russian brothers Alyosha and Rudi are on a star-gazing, brotherly bonding mission across Siberia. Back at Mission Control, Shari is trying to get a second Mars landing off the ground. Oh, and Imke’s sister is somewhere in the Pacific Ocean searching for carbon life. Phew. ‘Pioneer’ is one hell of a packed and probing show. It’s an elegant but demanding journey and, whilst there are some beautiful sights, you might just be a little bit travel-sick by the time the mission is complete.

‘Pioneer’ won a Fringe First in 2014 and brings a stream of glittering four star reviews in its wake. I can imagine the sophisticated yet low-fi feel of the show, plus the ambitious themes and roaming structure, worked well in Edinburgh. But in its new home at Shoreditch Town Hall, ‘Pioneer’ feels a little bit crushed, as if a much freer and more expansive show is being slowly deprived of air.

The relationship between the audience and set isn’t ideal. The audience is crammed right on top of Cecilia Carey’s wide-spanning and high-reaching set, which would benefit hugely from being observed from a distance. These cramped conditions shut down the set, which uses 3 circular cut-out frames to create a series of contained, mobile or projected images. These frames should allow great variety, closing down the stage space at intimate moments and widening the view when the ideas and scenes grow more expansive. But our close-proximity to the set limits these options and we have no choice but to watch the whole of ‘Pioneer’ on close up. It seriously compromises the visual effectiveness of the piece and transforms a potentially nimble show into something quite cramped and static.

This awkward lay-out lends a slight awkwardness to the show and stops the production from really breathing. Jack Lowe is a director with such a sharp eye for detail – a chap unwilling to let a potentially effective moment descend into mere functionality - but all the tiny details feel a little overdone. Again, I think it might be that we’re too close to the show to be able to watch it on our own terms, and control what we choose to absorb and let slide by. Scene after scene is invested with little theatrical twists. The astronauts on the second Mars Mission stand behind 3 circular screens and roll about on chairs, their limbs flailing in a mimicry of weightlessness. The action is frequently frozen, as the actors walk in slow motion across the stage. At frenetic moments, the set is kicked into frantic motion and the cast wheel those slightly cumbersome screens about the stage, whilst the remaining actors jump through these rolling hoops. In isolation, all of these ideas are thoughtful and strong, but there’s something about sitting on top such a busy show that starts do the head in.

The devised script, too, feels similarly cramped. Again, there is so much to admire in this beautifully fractured, elegant and thoughtful work. ‘Pioneer’ is attempting to ask big questions about the way we communicate and the way that distance is as much psychological as it is physical. They are exploring the idea of home and belonging and questioning the meaning we invest in those words. They are examining the human-cost of a mission to Mars, carried out in the name of humanity. It feels like the script might read beautifully and, on a performance when all the stars align and the set feels a little bit freer, the words might well take off on stage. But on a less than smooth night, the earnest way in which ‘Pioneer’ attempts to connect every single little dot does begin to frustrate. There is something about devised theatre that encourages a little too much tidy linking. In straight plays, there are often scenes that don’t really work, feel out of place, surprise or even feel superfluous – and that is OK. Sometimes the scenes that don’t work give the audience space to breathe. But in a devised show, every scene is conjured into life with such exquisite care that it can sometimes feel a little too carefully crafted and convenient.

The endless connections in ‘Pionner’ start to build and build until they gradually feel a little over-worked. Stranded astronaut Imke’s sister is bought into the fold late on in the play and – lo behold – she is searching for the same sort of life (‘our very own alien life forms’!) that her sister is trying to foster on Mars. The brothers’ story is tied in way-too neatly, when Imke lands right at their feet and all the characters’ philosophical muses link very smoothly with each other. This inter-connectivity, on occasion, makes for some beautiful moments of reflection:

‘And as she travels across this darkling plain, she realises that nature’s imagination is so much more instinctive than our own and that nature’s ability to re-invent its own rules is seemingly boundless.’

But these oh-so-carefully considered connections also begin to dry out what could have been a slightly freer and more surprising show. I have no doubt that curious directive will go on to create some finely textured and beautifully teasing shows, which gently but persistently get us thinking.  But I do think this company could rely a little more on the ‘instinctive’ imagination and, rather than carefully connecting and joining up the dots, really just let go.