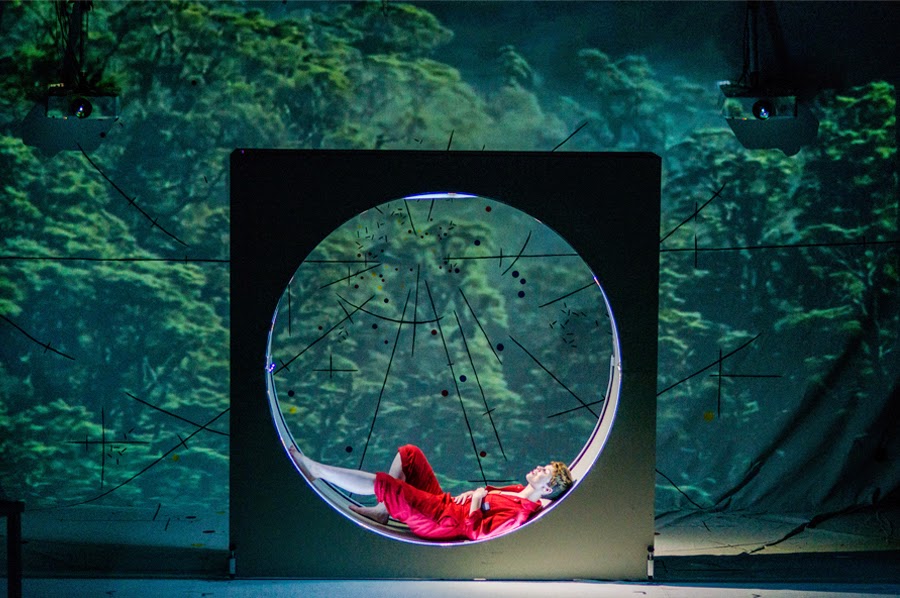 I want to talk to Jack Lowe about the Mars One Mission, which aims to land humans, including members of the public, on Mars by 2023. The final 100 candidates – eventually to be cut down to four – have now been picked and the story has been plastered across the news in recent months.


The mission is the starting point for his company, Curious Directive’s, latest production,Pioneer, but in Lowe’s show it has already crashed and burned, and there’s no convincing him otherwise: ‘I’ve already made my peace around the fact that Mars One has failed. I know that it has failed. I’ve got to trust my instincts on that.’
It seems fitting to be discussing this very current event as if it is already firmly lodged in the past. For Lowe, the fiction of Pioneer has become more convincing than fact. That’s no surprise, perhaps, given the intensity of Curious Directive’s devising process. The company make ambitious, complex and idea-rich productions and they spend an exceptional period of time gestating and developing their shows. With just a hint of a weary smile, Lowe elaborates a little on this process: ‘Like a lot of our projects, we (and that means the actors and creatives) spent the first week in a barn in Norfolk. We gathered film material and explored technical elements of the show. We had a week of walking, improvisations, microphone work and Artificial Intelligence stimulation. We even had sugar sachet duets.’
Sugar sachet duets? The mind boggles. Lowe explains the concept by placing a pepper and salt mill on the table between us – we’re sitting in the Globe foyer cafe, surrounded by polite murmurs – and twirling them around a bit: ‘Often, we would just sit down and literally push around sugar sachet. In a very Brian Cox kind of way we’d start planning things.’
Chief ‘sugar sachet’ man was astrobiologist Dr Lewis Dartnett who, along with psychologist Russell Woodhead, was brought into to help pull ‘Pioneer’ together. Lowe paints a picture of a peculiarly fluid devising process, where the distinction between the idea-makers, shapers and performers is pretty much none-existent: ‘Our work doesn’t have a playwright at the heart of it. We are a group of emotionally clever people who become short term experts with the binding glue of actual experts.’
When Lowe initially began discussions with Darnett and Woodhead, he became a little concerned. The scepticism among the scientists regarding the Mars One mission was overwhelming and scepticism, argues Lowe, is never a great place to start in theatre-making: ‘All of the scientists said the mission wasn’t going to work. That immediately created an uncomfortable starting point for me because it’s a pessimistic starting point. No one wants that when you’re creating a work of art.’ Lowe and his company had to come up with a new launch pad, so to speak. Pioneer would still reference Mars One but it would also bring in a new space-company, led by an Indian billionaire, who were attempting to carry on where Mars One left off. The show would thread together three connected stories; one concerning two brothers researching their grandfather’s role in the birth of space travel, another involving a marine biologist searching for non-carbon life and a final thread about a couple stranded on Mars. What started out as something of a creative dead end gradually developed into something much knottier and open-ended.
Lowe expands on the plot of Pioneer: the story of the couple stranded on Mars and has a whiff of the Book of Genesis about it: ‘One of the early things we decided to do is try to bring in the Adam and Eve story. We tried to reframe what Eve was doing when she reached out and picked the apple. We have re-jigged it so that she was really just being curious and a little bit reckless. She was happy to hold onto Adam’s hand and jump into the darkness.’
While there’s no doubt that Lowe (‘Have you read Carl Sagan’s Pale Blue Dot? It’s beautiful, beautiful.’) is quite cerebral he’s also very practical. Pioneer is an ambitious in its scale; the production involves six actors and demands wide and high spaces. Lowe’s next show, which will be about motion capture technology, is going to feature seven actors. Curious Directive’s previous piece about paramedics, The Kindness of Strangers, was set in an ambulance and could only be performed to five spectators at a time while their first production in 2008,Return to the Silence, required a mobile seating structure, so the audience could be wheeled about throughout the show.
It took Lowe a year to find the funding for The Kindness of Strangers. Nine commercial partners were required to get Pioneer off the ground – and the upcoming run at Shoreditch House has only been possible because the venue (‘And this must really should be shouted to the hilltops’) were willing to pay for the show’s extensive and expensive technological requirements.
Whilst it was relatively easy to create this type of expansive theatre fresh out of university, things have changed. ‘These days I have to fight for six actors. When we were a graduate company we could have 13 actors who were all doing it for love. Now it’s different. I spend a massive part of my time trying to make work on this scale happen. It’s really hard.’
There is a real worry, Lowe continues, that this type of genre-pushing work simply won’t continue to happen: ‘There is a really scary thing going on at the moment: where are the young companies making big plays? And I mean big plays in terms of the stage space and the number of actors.’ It’s obvious that this type of work is more demanding, both in terms of the creative and practical effort required. Thankfully, Lowe hasn’t been grounded yet: ‘I want to keep on telling stories that require a slightly bigger landscape.
Pioneer is at Shoreditch Town Hall from 9th – 22nd April and at The Drum, Plymouth from 19th – 23rd May.