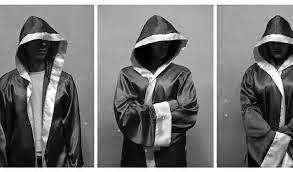 Five candidates, their eyes closed, stand in a boxing ring. Our host for the night, Angelo, wants us to vote for one of these candidates, by pressing a number on a nifty handheld device. The command is given and we cast our votes. The candidates open their eyes. Suddenly, they look very different. I think I’ve made a terrible mistake.

Ontroerend Goed’s ‘Fight Night’ is a coolly calculated look at the voting process and the inherent contradictions and slippery human psychology bound up in the system. The title and even the trailer sound physical and combative but this is actually a creepily restrained and considered show. There is no shouting. There is no fighting. Sophie De Somere’s set is really just a shadow of a boxing ring; there are no surrounding ropes and it is a clean and open space. Nothing is forced on us and, on the surface, the entire process is consummately civilised. But as the night wears on, a sense of unease and distrust develops. Who can we trust, what are we voting for and is there anything in here that we can really believe in?

Director Alexander Devriendt plays his hand with a deft and light touch. With the help of Angelo’s oily smooth tones (with just a hint of contempt that flares up only briefly) we are slowly and subtly pulled into the system. The illusion of free will is craftily maintained – right up to the moment we realise it is all a total and utter sham. The sneaky structure of the show also lures us into believing this night is about the candidates and their opinions. It is only at the end that we realise that is not the case at all: this show is about us.

We are slowly given more information, more responsibility and more visibility. Initially, we are asked to judge the candidates solely on the basis of their appearance. In the next round, the candidates’ personalities come into play. Every time we learn a little more about the candidates, another vote is cast. In one extended round, the candidates are asked to step forward or backwards, depending on how in line they are with the opinions expressed by the audience. At the end, we are asked to vote again and all that data is roundly ignored. Given all this power – and placed within a system in which we can see the direct impact of our decisions – real data starts to feel irrelevant. It is the wielding of power that matters.

There comes a point in the night when the perspective imperceptibly shifts from the candidates to the audience. We are asked a series of increasingly invasive questions: what is your age, salary and job?; what phrase do you like, what qualities do you consider important, how much do you trust your fellow voters? As this information begins to build up, and we reveal more of ourselves, we begin to feel more and more important. We are slowly acquiring power – and we like it.


The candidates reveal precious little about themselves. They are slippery and reactive beasts, always quick to reflect the audience back at themselves. As the night wears on, the content is once again sucked right out of the election process until we are effectively back at that opening image – the candidates with their eyes closed – with nothing but our own instincts and beliefs to guide us. The candidates’ speeches focus solely on the process rather than the ideas supposedly voiced through that process. The candidates encourage us to make our votes count. They urge us to abandon the system. They plead with us to stand up for our ideals. They demand that we think for ourselves. Think for yourself, they cry, and vote for me!