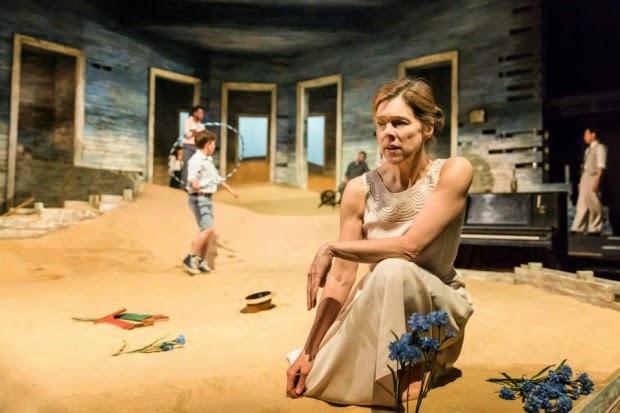 Even the title sounds wistful: ‘Ah, Wilderness!’ This early Eugene O’Neill play, written in 1932, is a bitter-sweet comedy, which pictures O’Neill’s Connecticut childhood as it might have been. It is a pre-cursor to ‘A Long Day’s Journey Into Night’, only it is set at time when all the drunkenness of the later plays is still funny, all the regret is still held back by hope and all that despair and disappointment is kept in check by love. This might be billed as a comedy but it is a Eugene O’Neill comedy: the emphasis is on the bitter rather than the sweet.

Apparently the play came to Eugene O’Neill in a dream, and a feel good dream at that. Director Natalie Abrahami has used this idea as a starting point for her production. Her show feels gentle, hazy and on the verge of drifting away altogether.

Some of these dream-like touches work better than others. Dick Bird’s set looks like a desert landscape – only with a piano and a table in its midst. The stage slopes downwards and, at the top, a series of open door frames interlock with each other. Every time you look through one frame, you are confronted with the sight of another. It reminds me of one of those warped visual illusions, in which you follow the stairs around and around and around, and end up exactly where you started.

The frames work well and create the impression of a world in flux yet somehow standing still, mimicking the turning point these characters all face but, invariably, will not take. The frames are also handy for making dramatic entrances and exits and, for this family – full of drunks, drama queens and romantics – that is a very handy thing indeed.

The sand I’m less convinced about. Most of the time, it’s just a bleeding hassle. The poor actors are forced to scramble up and down the slippery slope and, a lot of the time, that palpable physical exertion distracts from their performances. It also makes the scene changes (which really should be smooth in a production as ethereal as this) fairly cumbersome, as the actors valiant slide about with chairs and tables. Something that should’ve lent the show a fluid and dreamy quality only slows it down and breaks the illusion. It is hard to forget ourselves when we keep noticing the actors’ discomfort.

Another device that grates is the decision to place a ghostly O’Neill figure (David Annen) on stage. Annen is present throughout the production: he whispers along with quotations, blanches in anticipation of future anguish and generally makes a bit of a nuisance of himself. It’s akin to someone constantly nudging you and whispering in your ear: ‘This is all a dream!’

All this sounds like a lot of criticism for a production I actually really enjoyed. It’s just frustrating when such an emotionally sensitive show is marred by a few duff touches. But despite these distractions, this is still a deeply thoughtful show, which eventually entrances.

The family dynamic is spot-on and, as I mentioned before, painfully sad in all the hope and love it offers, which we know – from future plays – will only turn sour. It is frankly a relief to see a mother who isn’t drugged up to her eye balls. Instead, Janie’s Dee’s mother is the lynch pin of the family; a cool and pleasingly cynical figure who humours her husband’s and son’s romanticism, whilst also gently taking the piss (‘I see you’ve come out of the night Richard!’) The father, played with such hearty compassion by Martin Marquez, isn’t a man hardened by his own disappointment, but an open-minded and generous soul, who is able to appreciate his son’s naive idealism and worthy reading habits. The son, Richard (George MacKay) – who effectively stands in for Eugene O’Neill – might be an outsider in his family but he is on outsider who is accepted. Even drunken brother, ‘My name is might have been’, Sid (Dominic Rowan) is still capably of lucidity and, possibly possibly, even change.

The moments that sting in this production are when the edges of this warm family are sharpened and we get a glimpse of what might go on to tear them apart. There is a brilliantly awful dinner scene when Sid stumbles in drunk, clambers up on the table and is egged on by his giggling brothers. The long-suffering Lily (such a dignified performance from Susannah Wise) reproaches the family for laughing at his antics and we begin to understand that it is this family’s ability to forgive will eventually be their downfall. Later, when Richard (George Mackay) stumbles home royally wasted, his father gives him a ridiculously easy ride. In another agonizing scene, Lily forgives Sid, only for him to sweep her aside as soon as he has been let off the hook. Time and time again, the scene for future despair is set not by cruelty but by too much love.

One scene sticks in the throat more than any else. Richard has returned home, deliriously in love and ready to return to the family fold. He and his father share a frank exchange and, just as they part, Richard runs up the (bloody sandy) slope and gives his father a kiss. It is a heart-breaking moment, a tiny glimpse of the love that might have been but that we know will soon be washed away in a swirl of liquor and broken-promises.