'Carmen Disruption' review or 'Is this my note?' 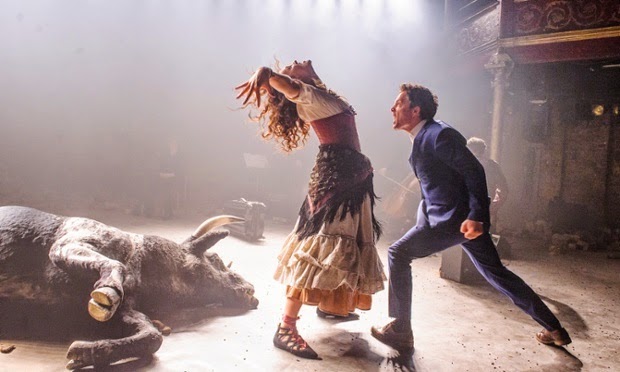 I used to know what to expect at the Almeida. These days, with artistic director Rupert Goold screeching out of the blocks, I don’t even know what the theatre is going to look like. When I came to see Mike Bartlett’s electric new play, ‘Game’, the seating had been entirely reconfigured to nestle around a central stage space. Now, with Simon Stephen’s ‘Carmen Disruption’, the theatre has been roughly shaken up again. This time, we’re funnelled through back-stage, led right past a dressing room – where a startled-looking singer is applying her make-up - and then directed right over the stage and finally to our seats. As we stride across Lizzie Clachlan’s elegantly distressed set, we have to tip-toe around a hulking, dead bull. Whatever you’re imagining, this bull is shit-loads bigger than that. We stumble to our seats, already deeply immersed in the concerns of this show. Look how close to vibrant, ugly life and death we have stumbled! Look at the pains we took to circle around the edges of that huge and frightening bull. Look at how we didn’t even look at each other!

‘Carmen Disruption’ was inspired by the curious case of a real-life opera singer, Rinat Shahm, who has played Carmen over 400 times in nearly 50 different productions. She is the ideal subject for a writer concerned with the splintering and re-moulding of identity, which Simon Stephens most definitely is. Stephens interviewed Shahm intensely and then wove ‘Carmen Disruption’ around her story. The play unfolds principally in London but also dots all about Europe. The principal characters from Bizet’s opera are all in here but they are shadows loosely tied onto enigmatic characters, who race about abandoned streets, connected with everything but touching nothing.

Michael Longhurst is now a total pro at holding together difficult, sprawling, yet super-precise productions. ‘Constellations’ and ‘The World of Extreme Happiness’ could have been washed away by their own ceaseless and criss-crossing movement, were it not for Longhurst’s beautifully relaxed yet rigorous direction. The same goes for ‘Carmen Disruption’, which could have been massacred by a less assured and intelligent director. This is the lightest and nimblest of plays but – thematically, visually, physically and musically – it’s incredibly tight. There are moments when it feels like everything is in  total chaos – but there are also minutely choreographed scenes in which every phrase, tic, pulsing chord and solitary shaft of light seem to inform this play’s big ideas about loneliness, obscured identities and obfuscating landscapes.  Longhurst has the confidence to let the chaos unravel and every connection fracture – but he also has the skill to pull the show back together with just a few little twists, so that the stage, text and performance pulse with meaning.

The opening few scenes are dizzying, flamboyant and confusing. We’re left adrift in a world that we vaguely recognise (the Royal Opera House keeps popping up and familiar streets, bars and songs occasionally emerge) but can’t quite pin down. An opera singer (Viktoria Vizin), dressed in Carmen’s traditional, tightly corseted but flowing costume, occasionally bursts into song. The music (accompanied by some heavy chords from the two cellists on stage) sounds familiar but the contemporary lyrics, which reference mobile phones, are out of whack with the original libretto. We meet a character called Carmen – only she is played by a preening and gloriously arrogant male-prostitute (Jack Farthing, absolutely killing it onstage). We come across a lonely girl called Micaëla (Katie West), who remains a total mystery for a long time, circling around the edges of the action.

All the characters offer glimmers of clarity, but everything is obscured and twisted, and clouded further by a gloomy and fractured stage space. The one central character who might guide us through this juddering ride is Sharon Small’s opera singer, who is playing Carmen for the umpteenth time. She is somewhere in Europe, preparing for her role once again and desperately hiding the photos in her airbnb room, in an attempt to feel more at home. This lost lady is our guide and, although she talks in bright clear sentences, she’s just as fucked as the rest of them: ‘I don’t know where I end and she begins.’

Amid all this confusion lies the dead bull, a huge and dark reminder of something that all these characters seem to have forgotten. The bull is rarely directly acknowledged but, like the traditionally-dressed opera singer – the ‘chorus’ of our tale – the bull speaks of a passion and bloody-ness these characters have lost. This bull is substance. It is flesh. It is the racing and gushing blood of life and death.

At one point (and gawd knows when in this whirling and teasing show) the bull begins to breathe. The connections between these characters have been getting just a little bit clearer and that bull, slap bang in the middle of them, might just be responding. But the characters still do not see him. There is such a fascinating interplay in here between the images, sounds and emotions that we – the audience – respond to and the reactions from the characters on stage take. We, the audience, have sat down in this theatre and chosen, very consciously, to connect with the characters on-stage. Despite all those obfuscations and ambiguities, we will grow closer to these events and people playing out in front of us. We will form some level of connection with these characters on stage – and, yet, they’ll never even see us.

Stephens and Longhurst play with the audience, teasing us with moments of clarity or exposed passion, which are just as quickly shut down again. The obscured characters talk in a pared down poetry that feels one step removed from real-life. Interestingly, it is the most lyrical moments – the most stylized moments, which in some way are as far from ‘real’ speech as one might get – that get closest to the characters’ internal lives. Again, Stephens teases us with the dichotomy of theatrical performance; the idea that those moments of greatest honesty and insight are, in fact, the moments when the playwright can be heard most strongly. It’s one of those weird contradictions of theatrical performance, that the moments of arguably the most artifice are also the most honest.

The same goes for music, which is as dishonest as it is truthful. Many of the most stylistic moments in Longhurst’s sexy-dance of a production - such as a tightly-choreographed scene in which all the absent souls gyrate in unison - are accompanied by loud and emphatic music. The music affects us deeply, but it is overtly theatrical too and, in some ways, dishonest. Those two cellists on stage are there to amp up the ‘real’ human emotions in the play – yet every time their heavy chords intertwine with the action, the moment becomes more self-conscious and arguably less ‘real’.

The greatest contradictory presence on stage is the ‘chorus’ singer (played with unbridled passion by Vizin), who is the most powerful yet diminished character on stage. She spends a lot of time watching from the wings. When she is drawn into the action and finally allowed to sing, she is always – always – cut off way too soon. Just as her singing might reach some mighty pitch or evoke a spitting lust or rage, the singer is forced back into the background.

This contemporary and technology-led world - this world of i-Phones and Skype calls and dropped internet connections and a bafflingly abstract finance sector (‘the selling of the selling of the selling of the last thing that we sell’) – has no space for Carmen. Her curving body, her music, passion and soul, does not fit into this churning but cool new world. She does not belong here, despite the fact that Carmen is bound up with absolutely everyone on stage.


Instead, this is a stage and world that makes space for electronic screens – one of which is suspended above the stage and flashes up with every transaction, email and text message that is sent throughout the play. This is a stage that can make space for a stream of emptied-words – but it does not have space for Carmen and it does not have space for that huge black bull which, although present, is – until the very final moments – almost roundly ignored. Look at the things we step right past! Look at the things that we fail to see and consider the way we fail to listen. Right at the close of the show, the ticker-tape flashes up with one last line:  ‘And then there’s a moment – when you sing it.’ Silence throbs around us as the audience, connected for one last moment, quietly reads that neon phrase that will never, ever sing.