'Light Shining in Buckinghamshire' review or 'Who's in control of the mains?' 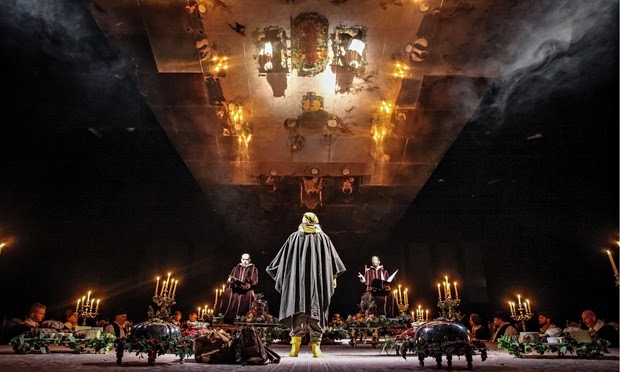 Listen, this isn’t going to be everyone’s idea of a good night out. I can think of a few people – particularly my theatre-loathing twin brother – who I wouldn’t urge to go see ‘Light Shining in Buckinghamshire.’ It’s pretty hard work, packed with endless characters, obscure historical references, knotty dialogue and stark little poetical vignettes. There will be moments when you feel out of your depth. But it’s absolutely worth riding the wave of Caryl Chuchill’s extraordinary text, which ripples with crucial ideas about democracy, the rights of the individual and the way in which we, in a society no longer governed by god or monarchy, decide to treat our fellow man.

It’s the middle of the 17th Century and King Charles is locked away in Hampton Court whilst Cromwell, along with his New Model Army, is trying to establish just how his Parliament might work and who or what it should stand for. The central piece in Churchill’s play is an electric depiction of the Putney Debates, in which Cromwell and his followers – as well as the dissenting Levellers who called for further rights for the common man and not just the minted gentry – argued their corners at the General Council. Meanwhile, further factions are forming, made up of people who once fought against the King, but have seen precious little of the battle-spoils. The Ranters are, well, ranting about the godliness that we have in us all and the Diggers – well, they’re digging.

That’s a shed load of characters and allegiances to keep in mind and this is Caryl Churchill, so the context isn’t handed to us on a plate. Think of this play (first written in 1976) as a series of bright shafts of light – blinding at first, but thrilling and illuminating in the end.

Director Lyndsey Turner and designer Es Devlin have done a brilliant job of providing a strong framework for the show, without limiting the spontaneity that fizzes in Churchill’s script. The Lyttelton stage has been taken over by an enormous table, on which sits a sumptuous spread. When the lights are right (and this is some brilliantly nuanced work from lighting designer Bruno Poet) the table looks a little like a battle field and the food, like clusters of armies. Above the table is a huge mirror and occasionally glaring lights; something bigger is looking on from above. And around the table sit the gentry and priests and all-round lucky bastards of the 17th century, delicately picking at their food. Much of the first half, in which we meet the dispossessed and disillusioned soldiers, farmers, loony preachers and vagrants, is accompanied by the gentle tinkle of clattering cutlery.

As the production progresses and the parallels with our own time grow stronger and stronger (who, today, is our parliament really fighting to protect?), the set and costumes shift. Lots of the characters start wearing modern dress. In the second half, after the Putney Debates have passed and the Levellers have been crushed, that giant table – which serves the rich and covers up god knows what – is gradually torn to pieces. Underneath the planks of wood lie fields of soil. This is England.

The Putney Debates are the backbone of this play, although the human stories create the meat around it. Churchill uses the exact transcript of this seminal political debate, and there’s something quite spooky and moving about hearing the exact words repeated once more. Cromwell and his cronies argue for limited constitutional rights, with power given to those with property and an invested interest in the land. The Levellers argue for something more fundamental – the right for every man to have a say in the running of their country. It’s dizzying, shameful and painful to listen to these debates and to imagine a time when these conversations actually bloody meant something.

Swirling around this blazing debate are other little plot-threads, often abstract and increasingly powerful. Churchill has this way of constructing an elaborate intellectual web – and then piercing right through it with just one exquisitely crafted human moment. What’s so brilliant about Churchill is that she’s is always willing to shake her play up and abandon all the high talking for some exquisitely painful low blows. One scene in particular will stay with me for some time. A butcher walks across a now empty stage and cries out that he has meat for sale! Everyone chuckles. There’s some gentle banter between the butcher and the well-heeled crowd but all that light talk quickly cracks and ruptures. The butcher gets angrier and louder, until he is eventually screaming at us all: ‘If [the meat] goes into you, it’s stinking death!’ Stinking death, that is. Now go home and have another think about whom and what you’re voting for.