'The Cutting of the Cloth' review or 'Maybe we should try another pattern?'

'The Cutting of the Cloth', Michael Hastings
Southwark Playhouse, 13th March 2015
Written for Time Out 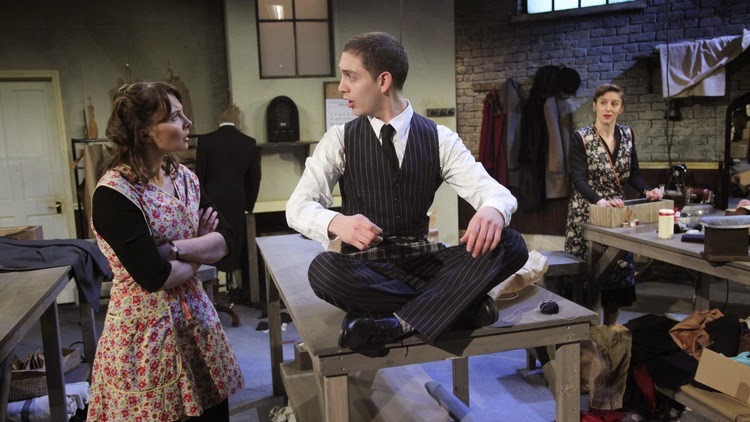 Sewing scissors at dawn! ‘The Cutting of the Cloth’ is a tale of two tailors: one a master of the handmade craft, the other a whizz with the sewing machine. Written by Michael Hastings, best known for his 1984 play ‘Tom and Viv’, it’s a finely crafted character study that’s a little frayed around the edges.

The real joy of director Tricia Thorn’s production is the care she has taken to depict the art of tailoring in 1950s London. Alex Marker’s set hums with industry -- steamers hiss, sewing machines whirr, and cloth is ripped, sewn and hammered within an inch of its life. The actors are impressively nifty with a needle, and by the end you’ll be tempted to knock up a coat yourself.

Hastings has written some needle-sharp characters. Spijak Wazki (Andy de la Tour) is the Shylock of the tailoring world, angry and isolated but rather splendid in his stubbornness. De la Tour spits and snarls his way brilliantly through the role, with a vulnerability beneath his vicious veneer. The spats between Spijak and ‘machine mad’ Eric (Paul Rider) are sparky and passionate, as the two lock horns – and scissors – in their cramped studio.

It’s all gentle, good fun, but also feels a little episodic and undercooked at times. Hastings wrote extensively for TV - and with catchphrases (‘Shaaaame!’), running gags, and background music that begins to sound suspiciously like a soap-show jingle, this play, which has lain undiscovered until now, never quite takes off.