'Lippy' review or 'Can we get a translator?' 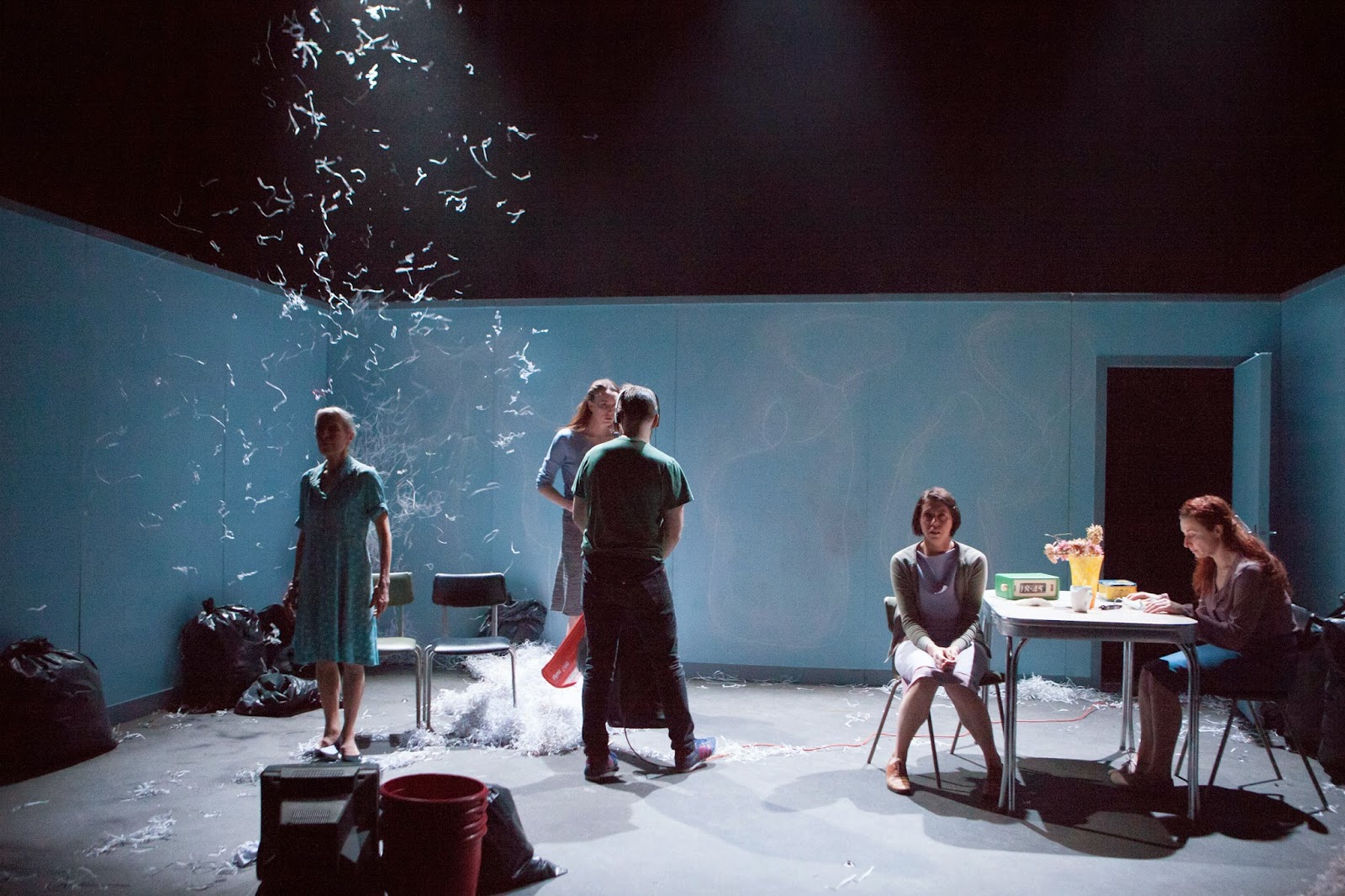 This is one fierce piece of theatre. It’ll jolt you around so much that, by the end, you might want to cry – or scream – or maybe just hide. The show is loosely based on a true story about a suicide pact between three sisters and their aunt, who shut themselves away in their home in Kildare and did not eat for 40 days until they finally, finally died. But ‘Lippy’ is structured in such a way, with weird snaps that pull you out of the show or twist the piece into the strangest of shapes, that it is really a piece about loneliness, control, the impossibility of knowing anyone and the greatest unknown of them all: death.

The show begins on a weird after-note. We are sitting at a post show discussion of a production we have not seen. An interviewer (Bush Moukarzel – also the playwright of this piece) is here to host a chat with lip reader (David Heap), an actor in the previous show. There is seriously odd strain to this opening section. It fills up and up with unknowns, ambiguities and missing connections. The two spend more time talking about a show that never happened – a show about a suicide pact between four women – than the actual show they’re here to discuss.  They look out to the audience, asking us to engage with a piece we have not witnessed. The interviewer, in particular, is not really present and, every time that suicide pact is mentioned, a shadow passes over his face. The discussion holds little shape but there are tiny pin pricks – mentions of death or heaven, or a red splodge still left on the actor’s face – that feel sharp and important. We watch this weirdly hollow performance, uneasy and one step removed, instinctively aware that something much darker is bubbling underneath.

Then the actor is asked to demonstrate his lip-reading skills. Our Interviewer stands to the side of the stage and delivers an anxious, halting speech. The lip reader talks over him, obliterating his confusion with false translations and more confusion still. Gaps are opening out, wider and wider, between intended meaning and the final meaning that might reach us. All the filters, the theatrical (and real-life) tools for translation, are tweaked and tinkered with until they’re pretty much fucked. Every word has a double, triple meaning and any certainty that we might have in the material and any confidence we might have in these actors to serve that material, quickly drains away.

And then there is the first of a number of dramatic ‘mud slides’ that engulf this show, pulling in everything that was solid and gobbling it up for a good. A large screen – previously used for ‘helpful’ (misleading) projections – is removed and a murky stage space is revealed, hidden behind a dark gauze screen. We can just about make out four ladies. It looks like they are holding balloons. The opening until this point has been so mysterious that these four blurred figures possess a strange power; they are the ‘truth’ that we have been waiting for but, man, are they difficult to make out in the midst of all that shadowy light.

The gauze is lifted and the ‘real’ show begins – only the characters we now long to know speak rarely and the clues we were hoping for about their lives and deaths have already been destroyed. Black bin liners sit around the edge of stage and they are filled with shredded paper. So much for any tangible clues. The directors (Ben Kidd and Bush Moukarzel) and designers (Andrew Clancy and Grace O’Hara) have created a stage space that bristles with black holes. This is the kind of space where people wriggle out of rubbish bags, tables get turned on their heads, urine and blood spill out from the strangest of places and the past and present, life and death, rattle against each other.

There is no easy resting place in this production and, just as we think we might be settling into the story ‘proper’, the show veers off in an odd direction. ‘Lippy’ is not a story, it is an experience – and the experience feels like dying. We do not get any closer to why these women tried to kill themselves but we do begin to channel the powerful force that must have driven them towards their end. The show starts to feel like a death force.

Everything propels us closer to the final dying moments of these four ladies. The lip reader moves among them, watching their final days, and he too is drawn into their deadly domain. He becomes a part of their hazy fantasies, induced by their slow and painful starvation. Everyone and everything is sucked into their world. The props are laced for destruction. A mug smashes and slices through a girl, a snickers bar sticks to the table like some cruel taunt, the walls glow with odd colours and water trickles from above. The lip reader – our link to another world – sits with the girls and lip reads a chillingly upbeat song. They are all singing someone else’s tune and everything they do takes us further away from the reality we hoped to read from their lips, their words, their actions.

A final image rams home the awful isolation of these women – of all of us, really – and the futility of striving for any sort of ‘truth’. One of the sisters, Catherine (Eileen Walsh), begins to recite a Beckettian ramble, packed with phrases and words that take on more power than you feel they should, but point to a writer in absolute control (ha!) of his material. At some point, this women fades and the screen re-appears. On this screen, a huge projection of a lady’s lips. They could be Catherine’s lips but everything else has been obliterated by this stage, so it’s hard to tell.

It is a brutal few final minutes, as we watch this mouth rattle through a death cry. The lips and the words don’t match up. Certain words might cause the mouth to stretch into something that feels like a great big smile, but they are not happy words. The words and the mouth clash constantly and the lips take on a life of their own. At one point, we know that Catherine is crying – even though we cannot see her tears. Beckett’s ‘Not I’ hovers about this final section but this mouth is much bigger and in high definition. This mouth is too finely detailed to allow us to escape into a hazy, frightening fantasy world. Instead we are trapped by this mouth, in thrall to this mouth, attached to a human on the verge of death. The words rattle by and there’s a whole life contained in them; flashes of an abusive father and tender little moments of warmth and happiness. But the words keep pushing forward; each word taking us further away from the reality of this woman but closer, closer to the reality of death.