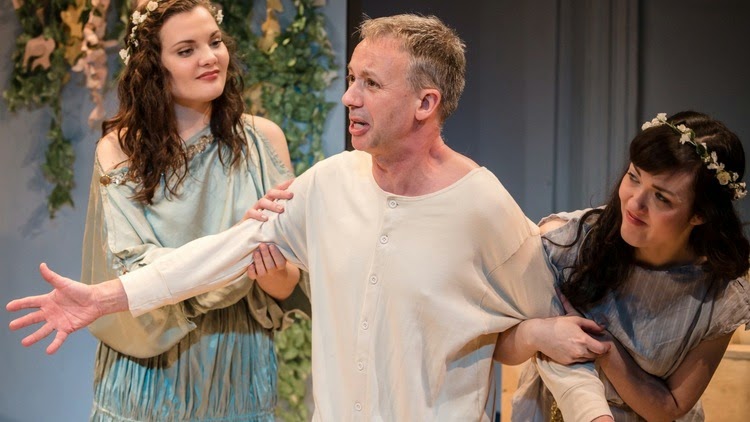 What a bizarre piece this is! Gilbert and Sullivan’s opera ‘Princess Ida’ opened in 1847 and was based on a Tennyson poem, ‘The Princess: A Medley’. It’s a satire on feminism and Darwinism to boot, and hasn’t been performed in over 20 years. Director Phil Willmott has evened out the tricky libretto and restructured the work but it still feels like an old-fashioned, flat-footed work.

The plot revolves around plucky Princess Ida, who is separated from her betrothed Prince Hilarion and sent to a remote all-female college. Prince Hilarion and his boorish chums break into the college and, after a failed female rebellion, convince the ladies to marry off. So much for girl power.

The only way this piece might’ve worked is if Willmott had made it deeply subversive – but this production feels quite formal, one foot lodged firmly in the past. Two pianists in black-tie flank Maira Vazeou’s pretty set, which is painted sky blue and adorned with papier-mâché flowers. Thomas Michael Voss’s tidy choreography is slickly performed but there’s not a flicker of irony about the dancing or performances in general, which feel deferent and stilted.

The cast works incredibly hard but it feels like they’re on leashes, perhaps held back by doubt. Zac Wancke (as the dashing Prince Hilarion) has a lovely tender voice and Bridget Costello reveals some impressive lungs, particularly in one of the few defiant pieces, ‘I Built Upon a Rock.’ But it’s down to Simon Butteriss, who plays Ida’s leery guardian Gama, to fire up this production. He is the walking embodiment of a sneer and his songs sparkle with malice. It’s fitting that the best numbers are awarded to the ‘baddy’ in this proficient but mean-hearted satire.