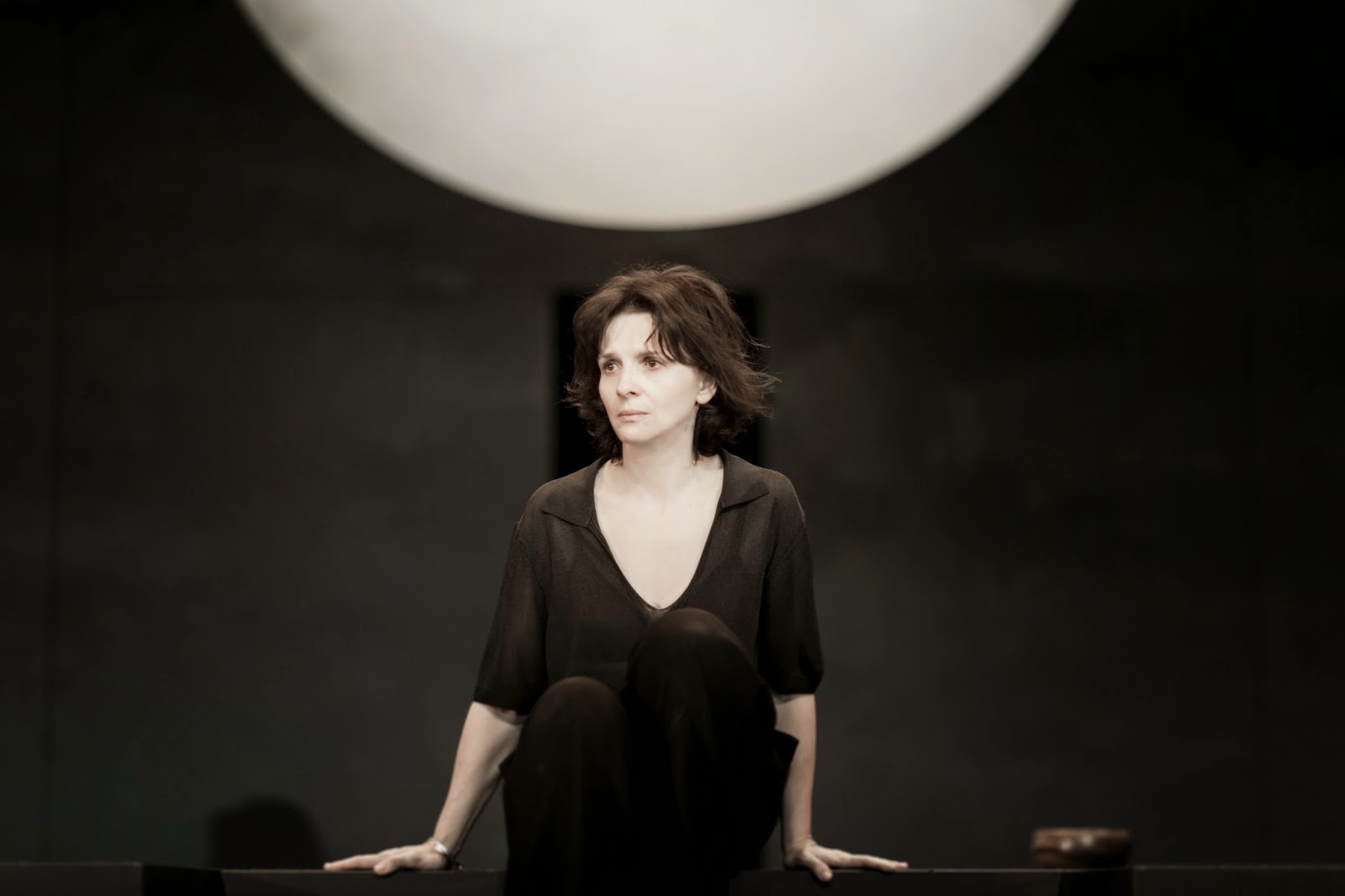 I’m not a huge fan of Greek tragedy – particularly the way that the majority of Greek tragedies are produced in London. Most of the adaptations I have seen are overly-earnest, humourless and weirdly sealed off. I leave feeling bemused, worried that I should be feeling something that I most definitely am not feeling. I leave worrying that I have missed the point entirely.

I felt very different after leaving (so bleeding hot right now) director Ivo van Hove’s drastic re-working of ‘Antigone’, starring that thundering heart of an actress Juliette Binoche. Sure, I still felt bemused. But I didn’t feel battered or exhausted and I definitely didn’t feel bored. This is a nutty production but it is light and lively, brave and surprising. It doesn’t match the funnelled intensity of Hove’s recent blazing version of ‘A View From a Bridge’ but it still a deeply thoughtful and imaginative show that opens up little access points to Sophokles’ tragedy, previously slammed shut.

Hove and his regular designer Jan Versweyweld have created a weirdly fractured and conflicting stage space. The Barbican stage feels cool and vaguely geometrical but powerful and human too, throbbing with images of distant but relentless activity. The back stage is filled with a huge screen, with a large circle curved out the top centre. This hole is slowly revealed and covered up throughout the production. It glows like the sun and, over the course of the show, comes to represent the gods. It is a mathematically perfect circle and there is something about the clinical nature of that shape – whose outline we are always made aware of that – that feels formidable in its exactitude.

Around this perfect circle is projected a series of abstract images. Sometimes we can make out a crowd of figures, surging forward. Other times we spot a policeman standing by a cordoned off area, or lonely figures trudging through the snow or desert. These images are huge but also hazy. They are the background noise to this show and work alternately with and against the action. Sometimes all it takes is a blurred projection of seething figures to gently unpick the all-seeing nature of the gods, to subtly suggest that life still surges on, despite the weighty prophesies invoked by those below.

In front of this screen is an empty stage and below that still, a row of sofas and chairs and a collection of bookshelves. It all looks quite modern but there is a sparseness to this section of scenery that makes it feel unanchored and ambivalent. The design seems to chuckle at any idea of permanence and the stage is rigged with descending sections of the stage, which remove key figures in the blink of an eye. It is a set that refuses to commit.

There are only 8 cast members and the Greek chorus is made up from some nifty doubling. Only Juliette Binoche as Antigone and Patrick O’Kane as Kreon play a single character. Otherwise, the observed and observers, the victims and vanquishers, mingle in confusingly close quarters.  The actors are miked up, which makes them feel loud and closer to us but, oddly, further away too. Hove constantly gives meaning with one hand – and then cheekily takes it away with the next.

The production and Anne Carson’s text flit between moments of high drama and flippant irreverence. The messengers are particularly down-played. Stripped of all the weird formality they normally possess, these messengers are amusingly self-serving souls. They speak in choppy idiom, as do the members of the chorus. Phrases like ‘off the hook’ and ‘he hit the nail on the head’ pepper the messengers’ and chorus’ speeches. The production swells up into moments of gorgeous poetic intensity, only to purposefully puncture itself a few moments later. We are never allowed to coast on the formality of the proceedings. Instead, we are kept brutally honest in a production that never allows us to fall for any greater power, be that the gods or the sway of dramatic convention.

Even the main role of Antigone has been rinsed of its standard dramatic power. Juliette Binoche’s Antigone is no tragic heroine. Dressed all in black and with a voice like a five year old reciting poetry, Binoche’s Antigone is a naive and stubborn soul. She is like the younger sister you wish you never had; talented but spoilt, smart but self-entitled. She is here to save her dead brother, Polyneikes, from a doomed afterlife. She is here to go against Kreon’s wishes and perform the ritual burial rites that will save her brother’s soul. Antigone is often played as a righteous and altruistic trouper – but in this version, Antigone (a daughter borne from Oedipus’ incestuous fumblings) looks like she belongs in therapy. Hove and Binoche refuse to make a heroine out of Antigone. Not only does this make her character more interesting, it also makes the other characters, particularly sister Ismene (Kirsty Bushell in fine cool form) and uncle dictator Kreon (Patrick O’Kane), far more textured and ambiguous.

Hove pulls at the threads Greek tragedy, daring the whole thing to fall apart. Great gaps of absurdity open out. A silly phrase (‘I need a top notch advisor!’), a slightly overplayed lighting set, some piously over-strained music; all these little touches dare us to laugh at the play and undo it all together. But, somehow, things never quite fall apart.

When the powerful moments do come – when the gods and text and dramatic peaks and performances align – they hit all the harder for the strange context in which they find themselves. In one black-scream of a scene, Binoche imagines herself buried in her brother’s tomb. Finally Binoche, held back for so long in this production, is given a chance to infuse the text with all her soul (‘I am nothing in the middle!’). The magnificent despair she finds in this moment is almost triumphant. When the chorus cries, ‘Her soul is falling apart’, we nod in mute and shocked agreement.

At one point, a huge image of Antigone’s still body is projected against the back screen. The suspended white circle cuts a whole right through her stomach and, for a fleeting moment, the Hove’s production finds perfect clarity. The sun, which has come to represent the gods and the life force beyond those gods, is depicted as the heart of Antigone. It is what makes her human but is also what tears her in two. The meaning lingers for just a moment and then, in a flash, melts away.

The final scene is with a broken Creon. As he rages, the stage is filled with that kind of magnificent emotion that doesn’t feel our own. Just as we might be left on a triumphant but oh-so ‘other’ emotional note, the screen fills with the roaming image of a cityscape. All those grand emotions and cracked characters seep into the scenery. We are left with a deeply uneasy feeling, as if Sophokles’ play has somehow wriggled into our cities of today, lurking in the darkness, ready to be re-awakened at some terrible future moment.