[A lot of words have been written about the recent fire at the BAC. I’m not going to add too many more. All I will say is that this venue has become a part of me. It is the place where I feel at home. It is where I go to be challenged, teased, changed and entertained. It is a peculiarly warm and embracing environment and is where I discovered the type of theatre I never knew I was lacking, until those early and eye-opening visits. I love it like a person and, when the fire hit, it felt personal. I know so many people who feel this human, emotional connection with the BAC. That is why I am deeply troubled but not afraid for the future of this building. We are all going to do everything we can to help nurse this beautiful beast of a building back to life. Amen.

In the meantime, I’m going to carry on watching as many shows as I can and, in my own way, explore and celebrate all the gorgeously diverse theatrical experiences the BAC has to offer...] 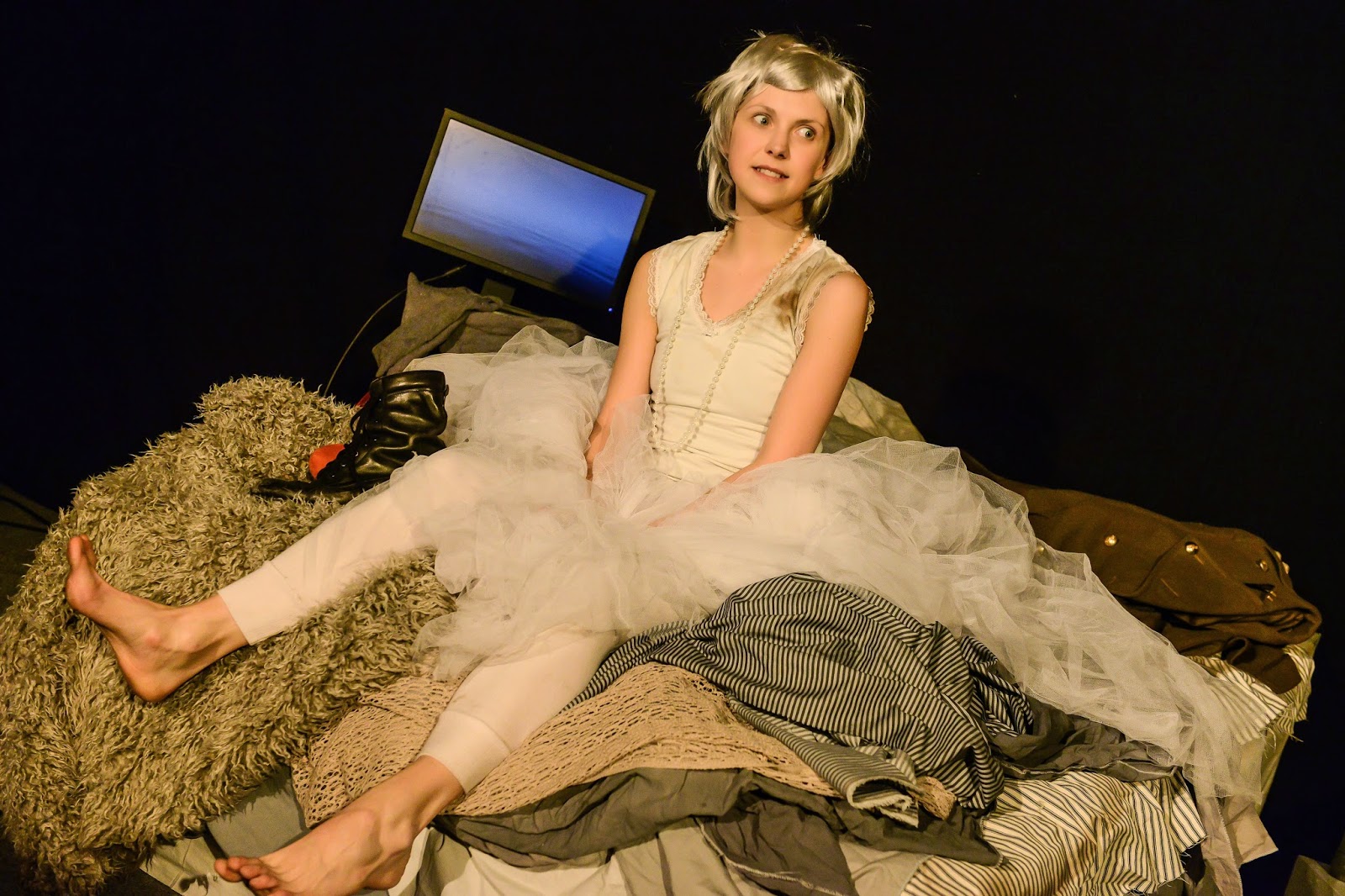 So, Penelope Retold. This is the story of that mighty Greek legend, Odysseus, who went off to battle in Troy and left his young wife Penelope behind for a very, very long time. It says a lot about the BAC that I’ve already seen this show from another angle, via the Paper Cinema’s beautifully fluid and skilful production, which retold the story of Odysseus with a flurry of vivid images, so detailed you wanted to run around inside them. Now it’s Caroline Horton’s turn to tell the tale from Penelope’s perspective and, as usual with this inimitable and thumpingly authentic performer, she doesn’t disappoint.

There is something about the very best performers, and writers, that feels deeply personal. No matter how vivid their performances or transporting their writing, they will always leave little bits of themselves scattered throughout the show. You cannot escape them and they cannot escape themselves. That is absolutely the case with Horton. She is an exceptionally expressive and mercurial performer but there is a bit of her – that is so strong and yet so vulnerable – that always radiates from her productions. It is what makes her shows so compelling, relatable and honest.

Designer Tim Heywood’s set (stark but sparky as hell) is dominated by a huge bed that is smothered with sheets, duvets, rugs and pillows. It is a haven or a prison, depending on the mood. Next to the bed is a TV screen, which projects rolling images of the crashing ocean waves. A vertical pole stands next to the TV that reads: ‘Do Not Touch’. This is Penelope’s domain and is where she has been waiting, for 19 years and counting, for her husband to return from war.

The beauty of this production is how Horton manages to hold on to the magnitude of the Greek myth whilst also puncturing it at every turn. That huge bed feels grimy and real but just a little bit mystical too. Horton is dressed in a grubby white vest top and spectacular white tutu. She looks like a faded fairy tale. Sometimes she utters rich and romantic poetry, still and lingering, in a deep and throaty voice. At other times, she squawks out empty slogans (‘Loose lips sink ships!’) or girly complaints. She is silly, slight and petty. She is beautiful, noble and magnificent.

Penelope was only 15 when Odysseus went to war and the production flits between the naive and pink-tinged beginning to Penelope’s story and its weary, granite-hard conclusion. Director Lucy J Skilbeck and Horton have created a strikingly nimble production; a giddy combination of bubble-gum fantasy, acidic satire and mournful tragedy. Reflecting on the early and romantic days with Odysseus, Horton’s Penelope jumps around the bed like a teenager in the throes of her first crush. There are some amazingly vicious cut away scenes, in which Penelope relates her story to the website, Military Wives.Com. These sections sting with false smiles and stretched out truths, as Penelope cheerfully talks about the ‘honour’ and ‘fulfilment’ that her life now entails.

Other scenes unfold in the moments following Odysseus’ first and fleeting return. In these scenes the script gets stuck on repeat, as Penelope tells us again and again of the disinfectant smell that accompanied her husband’s savage homecoming. It is wound and a stench that she, and the script, cannot move past. Woven in between these segments are ironic shipping forecasts (‘Gods, irritable to furious), some startlingly powerful songs (that rumble with all the soul those stretched out smiles have smothered) and cheeky speed dating sections, which fold in the audience members and highlight what an odd and removed entity Penelope has now become.

Every scene trembles with conflicting meaning, as Horton sets about re-writing and re-wiring this male-led Greek tragedy. During every performance, be that in the role of Penelope, Odysseus, their son or Penelope’s doomed suitors, a little bit of Horton leaks out the edges. Those strained website interviews glisten with odd, false cheer – but Horton the clown jigs about behind it all, imploring us to laugh at the absurd loneliness of Penelope’s predicament.  In another scene, Horton performs a grotesque dance of seduction, following Odysseus’ return. One arm shimmies for her husband, whilst her other arm grabs her by the throat. And throughout it all Horton’s eyes burn into us, imploring us to see the ‘real’ Penelope, the flawed and vulnerable person that lies behind the myth.