'Game' review or 'This game has how many levels??' 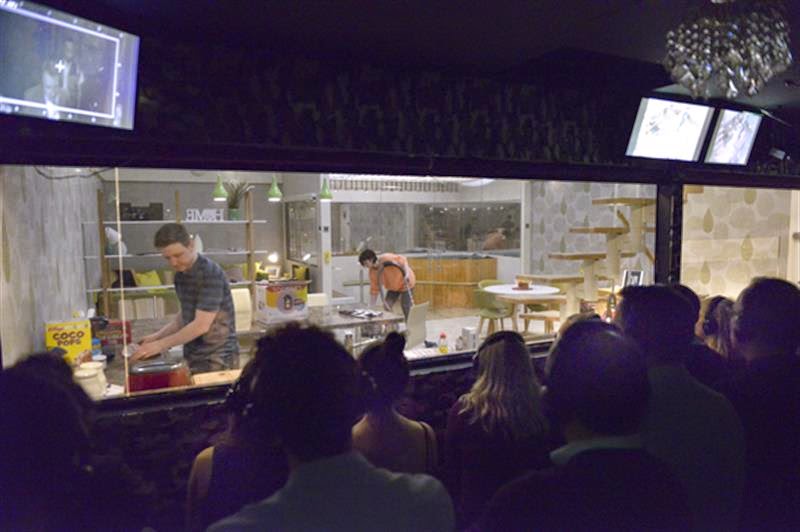 Fasten your seatbelts people, it’s a new Mike Bartlett play. And you know what Bartlett likes his audience to do more than anything else: think. And there is shedloads to think about in this profoundly inquisitive play. ‘Game’ is like a very strange and confusing mix of Big Brother, World of Warcraft, Benefits Street and a Newsnight episode about the current housing crisis in Britain. It is about the limits we will (and must) go to ensure a decent home, the impact that might have on our upbringing, the overwhelming surveillance culture in Britain, the commodification of – well – everything, the way that technology and media is seeping into our lives and the widening divisions between the rich and poor. So, yes, this is a show that’ll get the noggin whirring.

The Almeida has been drastically re-aligned in a new configuration which, to be honest, is a bit of a faff - but just about worth it. The stage has been shut down to a small space, enclosed by glass screens. Inside is a flash new home with a hot tub, two floors and surveillance cameras in every corner. It looks like the Big Brother set on a good day. The audience is seated (with headphones – ah, the modish theatre prop of the day!) in four sections, which surround this overlooked home. Three screens are placed in front of the audience, on which we watch both the action inside the house as well as the peripheral action that takes place among the audience. Often, we can hear two sets of dialogue at once and see three different sets of action, either live or filmed, at the same time. It is a deluge of information; a bit like having a browse on the internet but without a mouse to control things.

This set-up alone raises a lot of interesting questions about how we absorb everyday life and interact with each other – but this is only the start. This glass-cage home is in fact an elaborate game, which has been set up for the viewing pleasure of the paying public. The couple inside have been granted a swish home that they cannot afford, but there is a catch – there always is. They have agreed to let the public spy on them. Not only that - the public have guns which are loaded with tranquilizers, and they are allowed to shoot at will.

It sounds like a whacky scenario but what is quite frightening is how familiar this all feels. Once the rules have been established and we begin to understand the way the projected and real images add up, the whole scenario starts to feel weirdly normal. Bartlett and director Sacha Wares have pitched this piece so well, infused it with some many recognisable tics from everyday life (the computer game scoring system, the Ch4esque production logo, the Big Brother style decor, the paintball set up), that we are lulled into a false sense of security. It doesn’t take too long before we stop flinching at the manipulation of this couple and start to lean in, intrigued as to what will happen next.

There are a dazzling number of layers of observation going on in Sacha Wares’ coolly controlled production. On one level, we the audience are watching this play, as a whole, unfold around us. On another level, we are cast as fellow members of the public, one step away from those people sipping champagne and brandishing their guns. The surveillance set-up means that, when the action moves to our own audience section, we are sucked into the play proper, whether we like it or not. And then there is the couple inside, looking out through that one way glass, willing the madness to stop.

It makes for a peculiarly and persistently jolting experience, which allows the audience to instinctively inhabit a range of different perspectives. The very structure of Miriam Buether’s set and Mike Bartlett’s play forces us to examine the play from all possible angles. That bald fact alone is a theatrical triumph. We have no choice but to see multiple sides of the story.

But all this jolting around does have some troubling side effects and opens out some gaps in ‘Game’ which prevent it from being totally convincing. There are so many stories and so many tensions rumbling within this show that it’s very hard for any individual element to take hold. We see little scenes with this couple (Jodie McNee and Mike Noble) on the inside, and begin to appreciate the awful compromise they have tunnelled themselves into. But the constant interruptions, black outs and leaps on chronology stop us from properly investing in their story. These disruptions also mean that their story doesn’t quite add up. It’s hard to really understand the drastic steps this couple have taken in order to ensure a decent standard of live. It is hard to identify what they are pushing against, or running away from. Later, when a child is introduced into the mix, credibility is stretched to snapping point. The first time the kid is involved in this fearful ‘game’, the parents recoil in horror, yet it doesn’t take them long to change their mind. The ‘snap shot’ nature of this show doesn’t allow the time to really interrogate this transition and the emotional hold of the piece feels fragile.

It is the structure and framework of this piece – despite the slight wobbles regarding the ‘play’ inside – that really fascinate. The indifferent chat between the ‘shooters’ in the ‘outside’ world is horribly effective. A gaggle of girls sip and flirt with the warden (Kevin Harvey) as they vaguely handle their weapons, an uppity old couple bicker and goad each other on, a man and his fiancée line up from different sides of the room (one excited and one doubtful) and a bunch of drunk posh blokes wave their guns around, yaahhing and scoffing as they go. These little snapshots are chilling and there is something about the public’s total indifference to this couple and their lives that feels truthful and current and deeply disturbing.

Another element that works really well is the moment when the shots are fired. Just as the couple are about to have sex or just share any sort of intimacy, the shot is let off and one of the couple collapses to the ground. It is such a provocative set up, which gets you thinking about how the seemingly little compromises we take to get ahead quickly begin to spiral out of control.

Other intriguing questions materialise with the introduction of this couple’s son. Yes, this new twist doesn’t completely work on an emotional level but it does raise some pertinent questions. The first idea that rumbles beneath the kid’s involvement is simple but important: how do your own personal decisions impact the welfare of your child, and is it ever possible to make a decision independent of your offspring? But the idea that comes across most powerfully is the way in which a child’s early upbringing might permanently shape their place in and perspective of the world in which they live.  As the boy grows up he retreats further and further inside himself. Eventually, he is reduced to hiding in a box plastered with stickers; ‘Danger!’, ‘Keep Out!’. When the young boy leaves the safety of this box, we see the world through his eyes. The walls begin to crawl with projections of soldiers, marksman waiting on the outside for the right moment to shoot and ‘kill’. We realise with a thud that it’s probably too late for this kid. His parameters have been set and it is going to take one monumental effort of will to banish those soldiers, remove those walls and live a life that feels like his own. It is such a powerful metaphor for the way that children’s futures are nailed down from a very young age and how, without a lot of luck and support, they will be boxed in for good.