'Fiction' review or 'Who's up for a bedtime story?' 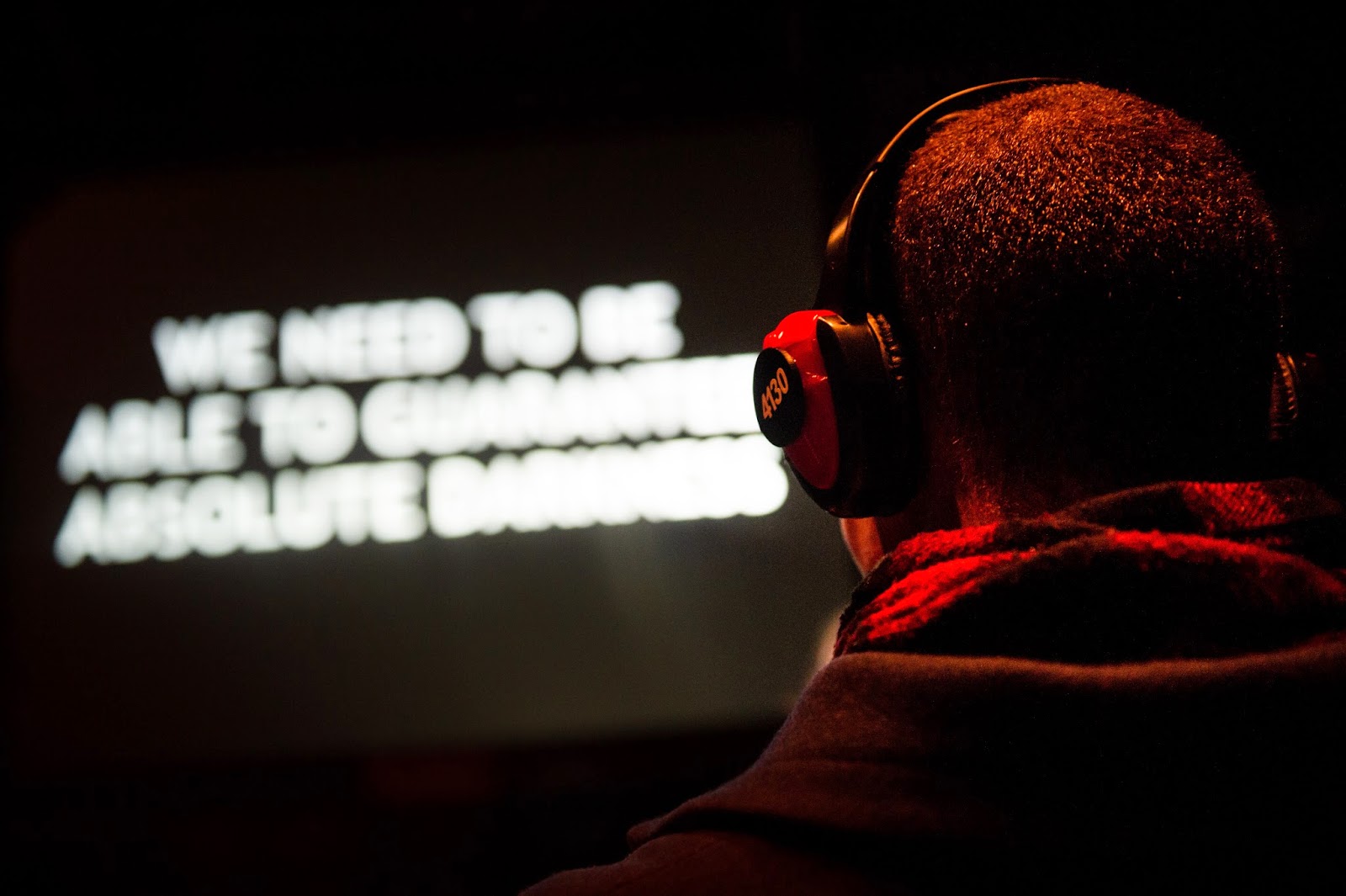 When Glen Neath and Fuel produced Ring a couple of years ago a devoted fan group sprung up around the project, enthralled and exhilarated. The show – as with ‘Fiction’ – was performed in pitch black, with the audience seated and in headphones, through which a narrative and soundscape was fed. It’s hard to describe exactly what happened in ‘Ring’ but dark and sinister activity unfolded around us and the audience felt involved, implicated and shit scared. ‘Fiction’ follows a different path and, although there are some shocking jolts in this deeply sophisticated show, it isn’t nearly as gripping or chilling as ‘Ring’.

Lots of the familiar Fuel hallmarks are still in place here. We’re led into that great and slightly ghostly hall in the BAC and handed headphones, intro music tinkling in our ears. The chairs are comfier this time and more neatly arranged; we might be sitting down to a late night screening. A projection screen stands in front of us and, after a few minutes, we are plunged into darkness.

What unfolds is a very strange story that feels like a cross between a dystopian adventure, a murder mystery and a half finished novel. The programme notes talk extensively about dreaming but ‘Fiction’ doesn’t really achieve a dream-like state. It is too a bit too formal, a bit too narrative-heavy and little bit too removed for that. This is a very hard show to lose yourself in and, for an immersive production, that is a big problem.

The main story is set in a very strange hotel, which seems to have about a million floors and is on the verge of being blown apart, or crumbling, or something. We, the audience, are cast in the role of spectator and placed in the charge of a mysterious and whispering lady, who doesn’t trust anyone around her. This lady has to give a presentation at some point although that too-solid focal point doesn’t really help the show; it lends a slightly mundane gloss to what might have been a much trippier experience.

Before the show begins we are shown some slides of a bland hotel room, which includes seats much like our own, as well as a bed and various props. This is to be our principal setting for the night. Odd images flash up in between the main pictures, hinting at dangerous or mysterious future events. It is an intriguing opening and one of the most successful sections of the show. But that weird hovering tension gradually dissipates as the images dissolve, the darkness descends and we are overwhelmed – but not really consumed by – a whirlwind of cross-cutting and truncated narratives.

The trouble with this piece is that it doesn’t feel quite real or surreal enough. It is neither a reality we can relate to nor an alternative reality that we can surrender ourselves to. Instead, we’re trapped in a sort of half-world and it’s ultimately quite tiring. I spent a lot of my time trying to work out the clues and join up the dots. I felt the need to be ‘clever’ when, what you really want to do with an immersive show like this, is stop being anything at all. What you really want to do is leave your body and your brain altogether and enter another reality, which feels awfully close to you but strangely removed. This never happens – at least not for me – in ‘Fiction’.

There are a few key contrasts with ‘Ring’ that let this show down. Firstly, in ‘Ring’, the show remained oddly tethered to the real room in which we were sitting. We were kept suspended in an acutely heightened state of anxiety, unsure whether the events unfolding were happening right up against our skin or that weird other world playing out in our headphones. But in ‘Fiction’, despite the fact we are seated as if waiting for a presentation, the real room we are sitting in becomes irrelevant. ‘Fiction’ feels like it is happening entirely elsewhere and is much less unsettling for this.

The other problem is that where ‘Ring’ kept us involved with one key – but weirdly fracturing – story line, ‘Fiction’ plays around with multiple threads. Handled a different way, this structure might have proved weirdly dislodging but the script is so erratic – and a bit annoyingly self aware – that it never pulls us deep inside.

There are a few frightening moments that keep us on our toes. The loose structure of this piece allows for some shocking tangents and a few scenes tap into that awful jolt you get when, in a dream, something that initially appears totally normal turns out to be totally fucked. These are by far the best bits, when a benign description lulls us into a false sense of security and then quietly and spookily mutates into something gruesome. But that’s not enough to sustain a dense one hour show and for much of the time I felt myself drifting into my own fantasy world rather than the one rattling around in those headphones.