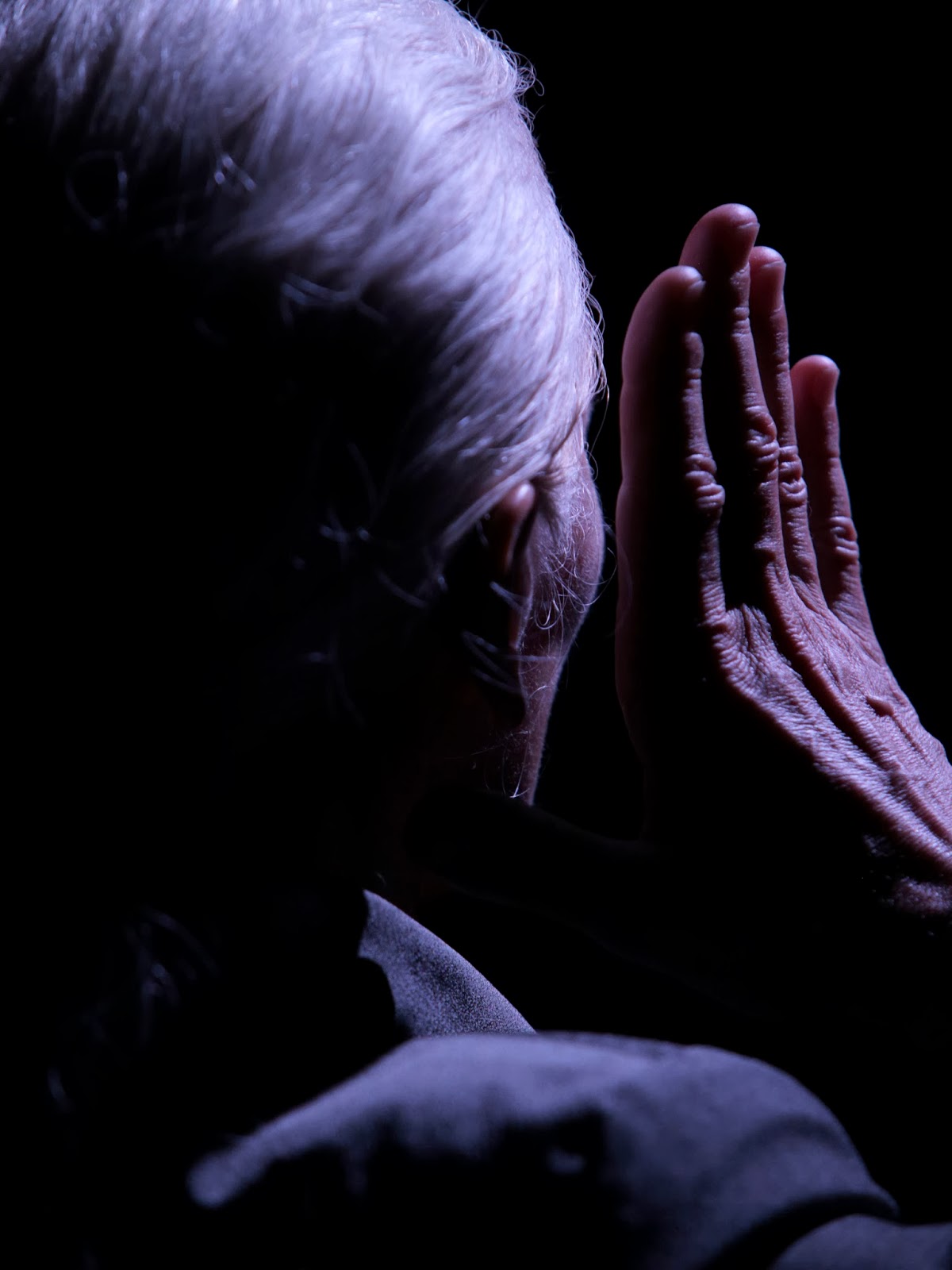 What a strange and exceptional experience this is! With ‘riverrun’, Olwen Fouéré has extracted the voice of the river from James Joyce’s bewildering novel, ‘Finnegans Wake’, and created an absorbing and deeply physical piece of theatre. We follow the river’s journey from source to sea and along the way meet a world of people, thoughts and emotions. We instinctively experience and understand all of this, even though the language is hard to understand and the content, obscure indeed.

Olwen Fouéré is a theatrical legend in Ireland and it isn’t hard to see why. She holds the room completely. It feels like her every pore has been engineered for expression.  Fouéré has a long white ponytail. When it swings out in front, she looks like a beautiful older woman. When her hair is hidden, she looks like a tough old man. Sometimes, Fouéré looks like a native Indian and other times, when the lighting is particularly harsh, she resembles a skeleton. She can be whoever or whatever the text wants her to be. That’s fortunate, since this text covers an awful lot of ground.

It definitely takes a little time to sink into this show. After all, the words Fouéré utters – in that swirling, smoky torrent – don’t really make much sense. There are a few glimmers of reason but, on the whole, the words feel foreign. The same feeling of panic I often experience at the start of a Shakespeare play, that anxious scrabbling about for meaning, sets in. But it doesn’t take too long for the tension to lift and something bigger to take over. The language might not be language as we know it, Jim, but it starts to make sense.

Through sheer force of will and bloody talent, Fouéré patiently and forensically extracts meaning from the burbling stream of words. At first, it’s only Fouéré’s facial expressions and vivid characterisations that take hold. As the text tumbles along, Fouéré picks out some fleeting but vivid characters. Perhaps they’re lined up along this river Liffey, which roles through Joyce’s epic novel. Nattering women leap out of the rushing horizon. Wizened old men pop up. Happy people, sad people, sozzled folks and straight-talkers. It’s like every Irish character you’ve ever read about or met has been lined up along the river, ready to talk.

There’s a certain hardness and obliqueness that comes over Fouéré’s eyes when she talks as the river. But, when she inhabits the characters – even if just for a second – Fouéré’s eyes open up and she lets the audience in. The eyes sparkle for the cheeky characters, expand for the kind ones and squint for the old. Endless souls clamour for attention and expression, all tightly bound up in Joyce’s extraordinary language and released in Fouéré’s performance.

Then there is Fouéré’s voice, which has a simply awesome range. She commands polar tones at will. Just a flattening of the timbre and the words become funny. An elevation and the language grows absurd, or a whisper and we’re suddenly straining for bigger and more profound meaning. Fouéré works closely with the microphone to create microscopic variety in the texture and volume of her voice. The impact of the voice is augmented by Alma Kelliher’s sensitive soundscape and Stephen Dodd’s decisive but fluid lighting states.

There are some moments that wash right over one, or lose one completely, but this doesn’t matter. This show is as much about an overall sensation – a grabbing on to something bigger – than it is about clutching on to single moments. Some of the best moments, for me, are when Fouerre leaps right out of the human souls and into the depths of the river. Make no mistake – she is always the river in this show, as her body moves to one rhythm and her mouth responds to another. But, for a few mesmerising moments, the body and mouth work and move in synch.

Fouéré becomes the river yet still holds onto all those people she has briefly occupied or passed by. It’s as if by becoming the river she has tapped into something hidden and essential about this kaleidoscope of people we have met. It feels like the river knows things we will never understand; as if a (eternal) life of watching has allowed this river to understand life on a deeper level. ‘I know thee’ howls the river and it sounds like the truth.

All this might sound pretentious in writing but it doesn’t come across like that in the theatre. This is an absolute pro using all her skills to extract the essence of meaning from a genius writer. That kind of combination is always going to create something exceptionally wise and moving. The simplest analogy I can think of – and this is surprising coming from an atheist – is that ‘riverrun’ is like listening to a bed-time story told by God. Believe!